My KiwiSDR Is Up And Running Again (With A New Name)

It's almost two weeks since my KongSDR refused to cooperate. After some fault-finding, including input from the excellent kiwisdr community, the conclusion was that the Beaglebone, the computer that runs the actual SDR, had failed. Unfortunately, that board does have a fail rate.

I eventually orded a replacement (two, in fact) from Mouser  which arrived at my home on Monday. After I had replaced the Beaglebone everything was fine again, and yesterday I set it up in Kongsfjord, with a new name and link: http://arcticsdr.proxy.kiwisdr.com:8073/. This is also selectable on the link panel to the right.

So! Fingers crossed and all that. The current Kiwi configuration has double capacity with up to eight receivers, but only two will see the spectrum. No other functionality is reduced or removed. 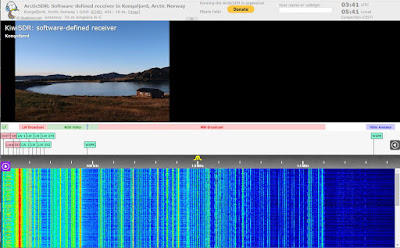