An excellent July 1 Es opening towards mostly Denmark and Sweden (192 logged stations) ended with  exceptionally strong signal levels from stations in Shetland and the Orkneys. SIBC had a good signal for about half an hour, with RDS decoding most of the time. An MP4 video with an "SIBC" jingle on was sent to the station. Shortly afterwards, I received a friendly response along with an e-QSL. SIBC shares the Bressay tower with BBC transmitters - at one time it seemed like it was the only transmitter location that was heard on my FM band. 1800 km.

Thanks Svenn M. for sharing v/s. 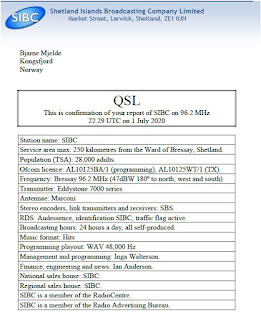 June was a good month for FM DX up here. Most openings were to the south, meaning Russia, Belarus and the Baltic states with some stations from Poland, Germany, Sweden and Denmark too. The complete June log is available as a pdf file here.
Lagt inn av Bjarne Mjelde at (UTC) 17:21 1 comment:

A Mega Combo for FM DX

The short version: Use a wide-band SDR, HDSDR for surveillance and recording, and SDR Console for playback. And FMList for loggings!

As a Jaguar for Perseus user, I am used to being able to see (quite literally!) if there are potentially interesting signals on the MW band, both live and for the past minutes/hours/days if I’ve been away for some reason. Continuous or scheduled IQ recordings then make it possible to «go back in time» and log stations. This is a massive step forward compared to «linear» DX-ing and makes the DX hobby a lot more interesting. Why? Because you hear more stations! Of course, you can record IQ files at random for later analysis, but you must listen through them all to be sure not to miss anything. You do not have that much time. So, seeing potential DX is a vital part of the DX hobby in my view.

What about FM? There is no Jaguar software equivalent for FM. Es and Tropo conditions are much more random by nature than MW propagation. So, if you want to log FM stations, you need to be there when it happens, either by sitting in front of the radio yourself or rely on alerts from fellow DX-ers or FMList.org. Openings are easy to miss – you may have other things to do – and sometimes openings close, just to open up again half an hour later. And you were not there were you?

So, to keep on top of DX events, you need to see the signals. And you need to record them without knowing if there is anything interesting on the band. And there is a method to do so which in many ways resembles how Jaguar for Perseus works.

Fellow DX-er OJ Sagdahl and I learned recently about two documented, but to us unknown features in HDSDR: The combination of ‘Low Speed Waterfall’, and ‘Save Current RF Waterfall to Image File – Periodically’. Low Speed Waterfall enables you to slow down the waterfall, thus making it cover a longer time span. The Save Current Waterfall function will save the RF waterfall as a BMP image at intervals you set. Waterfall is far better than spectrum to detect signals, so I suggest you minimize the spectrum display as much as possible. To make the waterfall even bigger, you can collapse the mode section so that only the waterfall and spectrum (or what is left of it) are displayed (see image below). This combination enables you to check a day’s DX by using a minute to scan through your image files and see if anything interesting has happened. Make a note of which times are interesting to check. Then, play back the recordings you made.

If there is nothing of interest in the image files, you can delete the recordings you made (and the image files as well if you want to). This way, you keep hard drive consumption to a minimum.

Since HDSDR is connected to the SDR you use for scanning the waterfalls, you also need to use HDSDR to record the IQ files. This is straightforward. HDSDR has a good recording scheduler, it is super-easy to start an IQ (or RF in HDSDR terms) recording on the fly, and HDSDR lets you organize your IQ files in a logical matter. Such as one folder for every day. This makes recordings much easier to retrieve. Just be sure to select “PCM 16” instead of “Auto” for sampling rate, because “Auto” is 32-bit instead of 16-bit and your recordings will double in size for no purpose. And speaking of size - individual HDSDR files should be less than 4 GB. I use 3.8 myself.
There is however a better alternative when you want to play back your files.

Say you find half an hour of interest, you have made an IQ recording and you want to check it. The best option for playback is without a doubt SDR Console. For two reasons: First, Console has an excellent RDS decoder. Some say it is almost on par with the standalone RDS Spy. Second, Console playback is file size independent. Console collects all the files from a recording session to a single playback resource. With Console’s Analyser, you can jump to any minute in the recording, go back and forward in predefined time intervals, and it lets you create a playback loop so you can check a certain time span again and again. And most important, you don’t have to think about loading another file. An overnight HSDR session with dozens of IQ files is handled as one “file” by Console.

Console lets you create MP4 video files on the fly, for your personal archive, for bragging to fellow DX-ers or for reception reports.

Why use two programs?

Because HDSDR has properties Console hasn’t, and the other way around.

An added benefit from using one program to record and another to play back, is that you can continue to record IQ files while playing back recorded ones.

My own setup comprises three RSPdx from SDRPlay, connected to one PC each. Each of them samples 8 MHz to cover the entire FM band. The IQ recordings are routed to an external high-capacity hard drive connected to each PC. I use Seagate 2.5”, 4-TB drives. HDSDR can handle just about any good-quality SDR available (except newer RF Space and Winradio SDRs). SDR Console plays back HDSDR files extremely well.

FMList, together with MWList, DABList and TVList, is the brain child of Günter Lorenz, and is maintained by him and a large group of editors. It's arguably the best combined source for databases and logging stations on the planet. Using the database to log stations is exceptionally simple, and surely accounts for the large number of FM DX-ers, especially in Europe, who use this resource. It's not perfect in every aspect, but nothing else comes close for the FM DX-er.

On June 22 I had a good Es opening to the south, with stations heard from Poland in the west to Moscow in the east.

Especially good signals came from Latvia and Belarus, and I added 15 new Belarus stations to my log. I prepared reception reports to three of them, Radio Relax 87.5, Yumor FM 93.7 and Avtoradio 88.2 MHz. Alex Yankovsky at LLC Vashe Televidenie kindly confirmed all of them. I also had Yumor FM on 91.9 MHz, but there are two of them on that frequency in Belarus, and the local weather update on the full hour was missed in signal loss. So, there was no definite ID on that one. 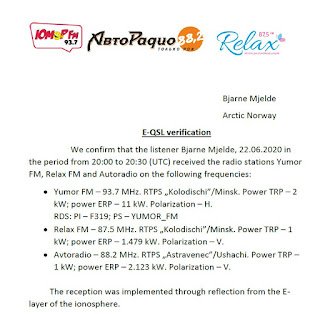