Well, "post-season" is a bit premature as today APR-12 I heard several North American stations on the 310 beverage with good signal levels; CJWI-1410, CHKT-1430, WMBD-1470, WGVU-1480, WLAC-1510 etc. And we hope that the two Asia beverages will still provide a week with good signals from Australia. But the most productive beverage, the dual, staggered 340 beverage, was taken down yesterday. After a six-week pause, both Covid-19 and weather related, I finally found a weather window to visit my Kongsfjord site on APR-11. A snow-packed entrance awaited me.

March and April (so far) have been challenging months this year, weather-wise. Lots of snowfall, and lots of wind that packs the snow in certain areas and cleans the terrain in others. As luck would have it, the starting point of the easternmost wire is in the "packed" area. Though 150 cm high, the support was covered by another 75 cm of snow. It took quite a bit of shoveling, and not least find the correct spot to shovel! The end points were also covered - in ice! The rest of the wire was above the snow, and in excellent condition. So, after a 1h 45min exercise, 2 x 350 metres of wire had been reeled in.
I think next year I will attach a fiberglass mast to the pole so at least I know where to begin.

The other beverages were up and in good shape. But the 310 beverage starting point is buried in even more snow. It will likely come down the coming weekend, along with the 50 beverage. Happy days...

Next, I connected the standard KiwiSDR antennas to KongSDR and ArcticSDR. The 70-metre longwire and the NCi Megadipol were connected, and an outdoor connector failure for the Megadipol was repaired. The Kiwis are now back to their excellent SW reception. The Megadipol on ArcticSDR is superior for higher SW reception (12 MHz and up). KongSDR is a good alternative for lower SW and MW reception. DRM reception has been enabled. Kiwi users please observe that the Stats tab now has sunrise and sunset times available. Times of course UTC.

To end this blogpost, the photo below was taken upon departure at 16 local. The clouds had finally given way to a very bright sunshine. The 100-km return trip was a breeze. 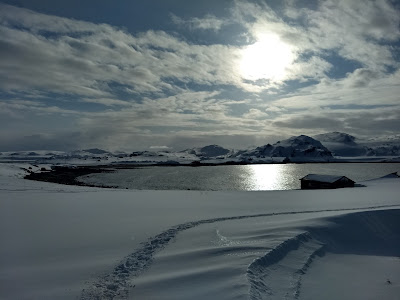 In the early days of April, the MW season on 71 North is soon coming to an end. The days are already 15 hours long, and northern signal paths are becoming increasingly attenuated. So, maybe time for a little round-up!

On a personal level for the KONG crew, the season started in the worst possible way with the loss of a great friend and excellent DX-er, TJ Bråtveit. TJ was a part of the KONG crew for many years, and will always be missed. The remaining three of us, me, OJ Sagdahl and Ole Forr, will keep up the tradition, which includes two annual gettogethers at Smøla island, and two, including the main KONG DX-pedition, in Kongsfjord.

The Kongsfjord antenna line-up was similar to previous years; four beverage antennas. The dual, staggered beverage to the North American west coast proved exceptionally efficient this season, surely a result of feedline and grounding replacements. Throughout the season there was a steady flow of new California loggings - partly due to conditions but surely also due to "cheating" with daytime power. Our temporary, 1000-metre remote setup at Mount Loran also logged lots of nice stuff for us. It was probably the last autumn we were allowed to use that site. We'll see what to do the coming autumn. "We have a plan"!


The Pacific DX was.... I wouldn't call it disappointing, but... But yes it was. There were some interesting openings, especially towards Western Australia, but I don't think we ever spotted a truly great opening. Some new stations from Australia and New Zealand were logged though. Personally I got my first Tasmania station, but on x-band so not "really".

The three of us have our own PCs and SDRs running in Kongsfjord and Smøla, and activity levels between us vary quite a bit.  I am certainly the lazy bugger of the team but I did hear a few great stations myself, or with the help from the other two, which can be found in the logbook below. Most common stations omitted. Speaking of which: DX-ers have always shared loggings. Nowadays, the methods of sharing vary a lot more than in the days of paper-based publications. Things have become much more fragmented. My own logs are found in the HCDX Log and MWList.org. I am surprised to see though that many DX-ers these days never publish their logs anywhere - but are more than happy to publish their QSLs. I am somewhat at loss to the logic behind this. 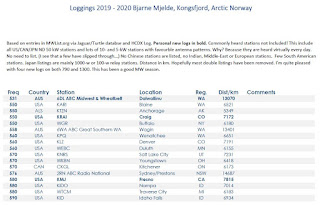 Weather this winter has been very challenging, much more so than usual. Windy, snowy, stormy. And no sign of spring as I write. Apart from one short outage, the new fiber connection has worked superbly though, even (although with reduced capacity) during a fiber breakage out at sea. Much better than the old 4G connection. Despite the dreadful weather, only one short power outage was noted. Thanks to clever internal power management, all equipment came up again except two KiwiSDRs which needed some extra help.

The beverage antennas will likely be dismantled during the Easter holiday, as the reindeer migration to summer pastures is underway.  I bought an 8-element FM antenna from InnovAntennas recently, and hopefully this summer too will see a few Es-openings. They are exceptionally few on this latitude, but intense! Three SDRPlay RSPdx should provide enough FM coverage.

For MW, the Perseus SDR continues to be our receiver of choice. There are two reasons: 1) The Jaguar software is developed especially for the Perseus. The integration is virtually seamless and Jaguar provides a massive improvement in efficiency over any other software for dedicated MW DX-ers. 2) The Perseus is still in many ways a benchmark SDR. You will find other SDRs with similar or even better specifications (such as the Winradio G33DDC). However, replacing the Perseus and porting Jaguar to a new platform would be a massive cost for many DX-ers. Still, what the future brings nobody knows.