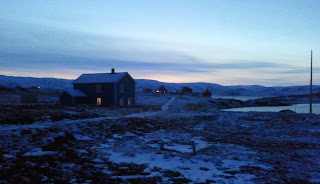 The picture faces south-southeast and is taken from the QDFA phaser/power box after I had installed a full-charged 18 Ah battery to the QDFA phaser. It will last for another 3 weeks before needing replacement. The mast to the right is the center of southernmost of the four QDFA deltas (or rather "houses" as they have been redesigned to).
Lagt inn av Bjarne Mjelde at (UTC) 06:39 1 comment:

If you want to tune from zero (almost) to eternity, this is it. With a 9 kHz to 3500 MHz tuning range, two independent 4 MHz channels (also available for recording and later playback), excellent specifications and a multitude of tools for signal analysis, this appears to be the heftiest SDR available today. Alas, the price tag will require dedication or easy cash flow, and I am rather sure that I don't want to spend USD 4000 for a receiver today. So don't expect to see a G39 review on this blog.

But Nils Schiffhauer got his priorities right, and submitted this video to the Winradio G3 reflector. Readers who know the G31 and G33 interface will note that the playback bar is different, resembling that of SpectraVue.