When responding to the JOWO QSL below, I noticed that I had another RFC station from October 2016 in my audio files. JOWE with 1 kW was mixing with JOCE Radio Kansai on 1395, and a very good ID was sent off to RFC's engineer. Email response this morning for my #100 from Japan on MW. Three more RFC frequencies to check out this season.
Lagt inn av Bjarne Mjelde at (UTC) 03:09 No comments:

With 5 kW, this RFC station is not too difficult to hear. A friendly letter, QSL card and promo stuff received in the mail today.

As a first-time loop buyer (!), I was curious to how the Wellbrook loop would compare to larger antennas. So, during Saturday, I set up a test scheme for LW, MW and SW. If you are as curious as me, you should click this link.
Lagt inn av Bjarne Mjelde at (UTC) 17:42 3 comments:

We erected our new, 80-degrees beverage last weekend aiming to hear more from central and western Australia. And we did! On September 9, during a lull in the solar storm, we had a couple of hours with good signals, including this one which is new for me.

Email QSL yesterday. Only my second confirmed West Australia station, but I expect the number to rise during the season.

KONG34 DX-pedition - In Preparation For The Coming Season (Pt. 4)

Yet another sunny, but at times quite windy day in Kongsfjord. Temperatures maxed out at 9 Celsius. Tomorrow is departure day for OJ Sagdahl, TJ Bråtveit and Ole Forr. And for me too, but not quite as early.

Today was used for checking recordings from the day before, when conditions to central and western parts of Australia and India, were good. We also did some antenna maintenance, but most of the time we just chilled out and had a few beers.

Today's dinner was a roast leg of lamb, with potato/carrot paste, sauce with onions & garlic, and fried broccoli. OJ picked a superb wine to go with a superb lamb, the 2013 Fontodi Chianti Classico.

We had some hopes for this evening's DX, but at 17:00 an X flare wiped out the Mediumwave, so no new loggings for us today.

The weather forecast says rainy and windy on Monday, so this picture from tonight at around 9 pm is possibly the last clear-sky picture from this DX-pediton. 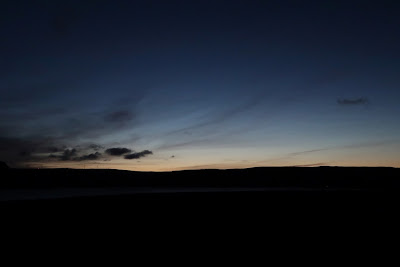 The KONG DX Site - Our Gear

With four blokes wanting to use four antennas, there's a bit of logistics to take care of. Here's how the living room in Kongsfjord looks like during the DX season.

First, we have my PCs and SDRs, on the shelf at the back. One Dell Optiplex, Micro Form Factor, and two Intel NUCs control my three Perseus. Each have an 8 TB hard drive. The Diamond 30A power supply powers the hard drives and one of the NUCs. My KiwiSDR is powered by a lab-grade 5VDC PSU, which also feeds two Perseus (a NUC powers the last one). A web-based antenna switch is on the right, because I use four antennas but only have three SDRs.

On the table in front are four DX-Engineering preamps for the beverage feedlines coming through the wall. They are fed by a separate, 13.8VDC PSU (under the bed). From each preamp goes a coax to four splitters. The three to the left will be replaced by Mini-Circuits 8-port splitters like the one on the right. 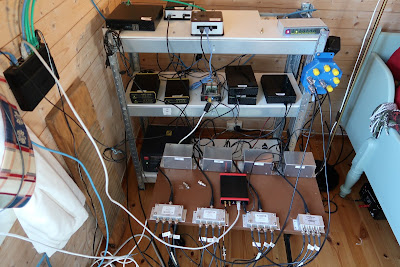 The KiwiSDR is connected to an 80-metre longwire in N-S orientation. The feedline is amplified with a Wellbrook splitter/preamp. The Cloud-IQ on the table is also connected to the longwire. Other SDRs in my shack is the ColibriNANO and the Airspy R2/Spyverter R2.

Moving to the other end of the living room are Ole Forr's and OJ Sagdahl's gear; five Perseus in all, plus preamps and a number of 8 TB hard drives, also two web based antenna switches. The PCs are hidden from view. The Tandberg Huldra 11 receiver now serves as a front end for my DAB+ receiver on the shelf above, partly hidden. 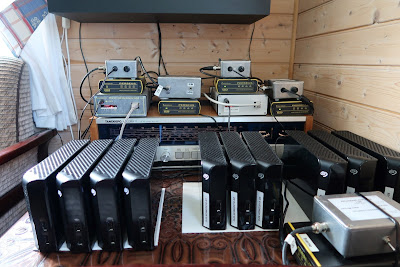 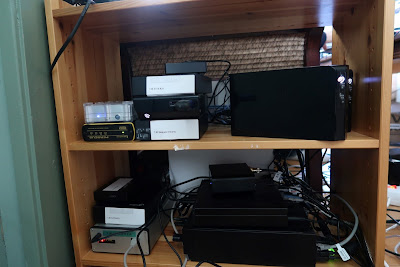 Linear power supplies is a must, and we have four of these 30A beasts, plus a few small ones. The voltage knob is removed for equipment safety reasons. 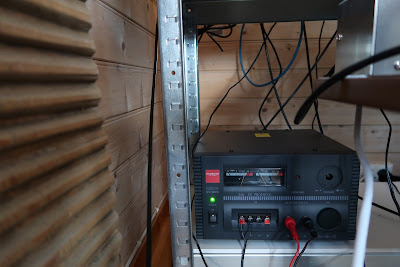 There are two mobile broadband networks. The main network is a 4G Telia network with a 200 GB/mo cap. We have remote control of our equipment through this network, using Teamviewer or LogMeIn Pro. The other network is a Telenor 3G (soon to be 4G) network with a 40 GB/mo cap. This is the KiwiSDR network. We have line-of-sight to the transmitters 3 km away so the speed is very good. All internal connections are cabled.
Lagt inn av Bjarne Mjelde at (UTC) 08:27 4 comments:

KONG 34 DX-Pedition - In Preparation For The Coming Season (Pt. 3)

Another sunny, but a bit windy day in Kongsfjord, with temperatures reaching 10 Celsius. Time to put up our new 560 meter beverage at 80 degrees. This should enable better reception of central and western parts of Australia. This antenna has a 285 meter coax feedline. The antenna and feedline are roughly described below.

Hundreds of goosanders were having a party in the bay just outside my house today. Maybe they were discussing the flight plan for the migration. 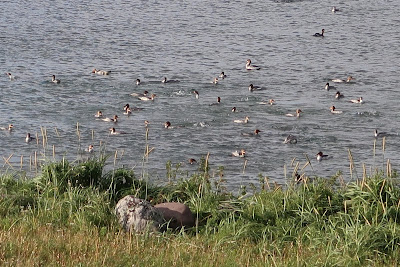 Today's dinner was reindeer stew with a paste made of potatoes, carrots and celeriac, and lingonberry jam from berries picked underneath the 310 beverage a couple of hours earlier. The wine was an excellent Cotes du Rhone.

And imagine our surprise when South Australia was noted with excellent signals duriing the meal! The new 80 degrees beverage delivered on its first day, despite the terrible conditions. Great signals on 729 and 891.
Lagt inn av Bjarne Mjelde at (UTC) 20:06 No comments:

KONG 34 DX-Pedition - In Preparation For The Coming Season (Pt. 2)

Today was noise hunting day. One possible source for our intermittent noise was the wind power facility at Raccucærro. The site manager invited us in to do measurements with a Cloud-IQ and a Wellbrook 1530LF loop. Preliminary results are that the windpark is not responsible for the noise, however when we were out the noise disappeared, so we're still a bit inconclusive. Great site though.

Other things we did was to finish the 340 beverage and prepare for the roll-out of the 80 beverage.

Today's picture is of course from the wind park, at 400+ masl. No vegetation at all, and lots of wind. 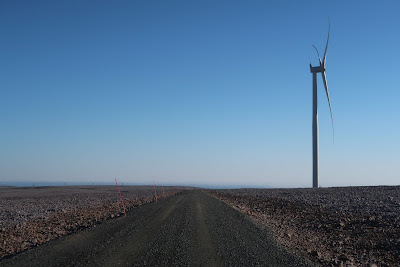 KONG 34 DX-Pedition - In Preparation For The Coming Season (Pt. 1)

As usual in early September, the KONG crew meet for an oval weekend to set up the gear for the coming winter. This includes to finish and secure the three usual beverages (50, 310 and 340 degrees), plus setting up another beverage at 80 degrees.

We're also on a noise finding mission, so equipped with a Wellbrook ALA-1530LF loop we will use the weekend to track down the noise source, or sources, which have pestered our low signal level MW reception.

With solar conditions like today we're not expecting to hear anything. We do have a nice selection of beers to test though, so we'll manage. We did get hold of what seemed to be the last stock in Norway of Death from Above (Garage Project), and got a nice taste of Tohki-Shu from Toccalmatto/Nøgne Ø

Thursday's dinner was fresh salmon loins from Lofoten, fried on one side then put in the oven to rest a bit, and carbonara. Chocolate pudding & custard for dessert. Nicely accompanied by a 2014 Donna Margherita. It was a left-over from last October.

Amazingly, almost no aurora has been visible so far. The picture was taken at 3:30 local, 75 minutes before sunrise. The twilights are long in the Arctic. The noise hunting mission starts at 7:30. More as it happens. 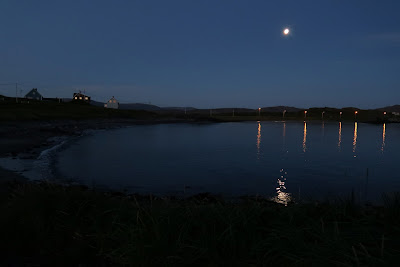