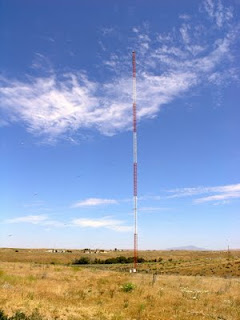 A few new veries in:
1110 KBND Bend OR, most likely running on their daytime power at the time of listening. Briefly heard before but not reported. Super signal.
1590 KBWG Boone IA long sought for, finally logged.
1060 KBGN Caldwell ID one of the big surprises on Oct 25's "Midnight Special" excellent western daytime opening. According to the verie, I was listening to the last few seconds of their 10 kW day power before switching to their somewhat more modest 58 watts. A most friendly, informative and informed response, including a hi-res photo of their transmitter mast (yes, that's the one above). Great signal.
1490 WLFN La Crosse WI promoted a Polka Show when I heard them. Otherwise they do Adult Standards.
Lagt inn av Bjarne Mjelde at (UTC) 21:11 No comments:

Several reports out, few QSLs in. But I did receive proper QSLs from Radio New Zealand's Domestic Service today; 1116 Nelson and 1458 Westport. A MW QSL from New Zealand is always most welcome.
Three NAs have responded as well, 980 KDSJ Deadwood SD, 1450 KIOV Notus ID and 870 KFLD Pasco WA. To cite from the latter: "we're the kind of radio station Obama loves to hate...haha!"
Lagt inn av Bjarne Mjelde at (UTC) 21:06 No comments:

We rarely use words like "the best night ever", "the best (name goes here) DX-pedition ever", or similar phrases at KONG. But it was a night to remember. Not only the fabulous Italian dinner at Kongsfjord Guesthouse, but even more what happened afterwards.
The daytimers. The signal levels. The everything. What a night we had.
Currently checking the recordings; we have to drive to the airport in an hour. We should start packing soon.
Lagt inn av Bjarne Mjelde at (UTC) 09:17 No comments:

Apparently, the relatively strong disturbance we got late on the 21 did little harm but a lot of good - maybe a good stir in the ionosphere was what was needed to get rid of the dominants.

The first two hours on the 22 were quite good, but little of interest happened during the morning hours and throughout the day. The pattern repeated on the 23 with excellent signal strengths (and weak Europeans) allowing stations like 880 KRVN Lexington NE and 970 KQAQ Austin MN. Amazingly, west coast stations were audible at 0030 and so was the 970 Alaskan - long before their sunset. 870 KFLD Pasco WA, 1280 KRVM Eugene OR, 1280 KIT Yakima WA and 1480 KYOS Merced CA were among the logged. But again, after 0200Z little of interest except a few short openings towards the west.

Good signal levels throughout the night but a little less intense than the first two hours. At the time of writing, 1120Z, North American signal levels are still good, and we are enjoying 1017 Tonga, 1098 Marshall Islands and New Zealand as well.

Tomorrow is departure day. We will celebrate the DX-ped with an Italian evening at Kongsfjord Guesthouse - five meals with 10 different recipies and (of course) Italian wine. The coming night could turn out just as busy as the one before.

This night's look at the northern sky revealed a sight different from that of last night: Aurora. Although very far to the north, it confirmed what we heard around Midnight UTC: A disturbance had set in. We did have a nice opening at 0000Z though, with stations like 1350 KCAR Clarksville TX and 1070 KATQ Plentywood MT, plus some very interesting prospects.
Prior to that, OJ and I had a most interesting email exchange with the CE of 1590 WVNA Tuscumbia AL. Not only did he confirm our reception with great joy, he also turned out to be an ex-DXer, having used an R-390A in his time. My own R-390A is standing only a meter away from my listening post, and although I don't use it for DX-ing anymore it is in excellent condition. We sent a couple of pictures to our new friend in Alabama.
Another QSL that evening came from 1650 CINA Mississauga ON.
Lagt inn av Bjarne Mjelde at (UTC) 03:17 No comments:

Calm, mild (+3C) and clear skies when I got up just before 03Z/05 local. Exceptionally clear air, the only light outside were the stars and the Milky Way - and not even the faintest sign of an Aurora. Amazing how light even a moonless night can be. Urban dwellers, whose night sky is polluted by their own artificial light, should experience this.
In the living room I find voices from hundreds of towns, small cities, large cities and political and economical centers only a microsecond away. At one moment, I share CFRW's music from the 70's with a 51 year old man driving home to his Winnipeg suburb - at the next, I listen to WSM as Merle Haggard accompanies a Nashville mother making dinner for her kids. And then I switch to KFOX and imagine that in California, a newly arrived, nervous but excited Korean finds comfort in hearing his own language on the radio.
From a tiny, remote spot on top of the world I can hear everywhere. What a unique hobby we have.
Oh, and by the way I got a most welcome verie from 1320 KHRT Minot ND. Heard on the great opening we had on October 3. The station's been on my wish list for years.
Lagt inn av Bjarne Mjelde at (UTC) 03:25 4 comments:

Exceptionally quiet. Lots of stations on all frequencies. Superb signal levels. But everything's been heard before! Signals are spread from coast to coast so it is extremely difficult to find new stations. Cool to hear my favourite band Steely Dan on CKDO 1580 though. But the day is not over!
Yesterday's good pre-noon opening towards the west coast brought 550 KMVI Wailuku HI, 680 KNBR San Francisco CA, 980 KBBO Selah-Yakima WA and 1590 KUNX Ventura CA in addition to those mentioned in yesterday's blog. KBBO is new for me. KNBR is very rare due to KBRW's monster signal. Other than Hawaii, nothing interesting from the Pacific, and China dominated the afternoon's Asia reception.
Quite windy but mostly dry and relatively mild with 2-3 degrees Celsius.
Check out the KONG19 Weblog for further details.
Lagt inn av Bjarne Mjelde at (UTC) 05:57 No comments:

Yesterday was less than inspiring - very broad conditions and little if any of interest. Better from 2300 and onwards with several nice logs, like 920 KWAD Wadena MN, 1020 KJJK Fergus Falls MN, 1370 WLJW Cadillac MI, 1460 WBRN Big Rapids MI, 1470 KMNQ Brooklyn Park MN and probably quite a few others still hiding in the hard drives.
As of writing, 0940Z, very strong signal levels from the west coast on the 340 beverage, like 610 KRTA Medford OR totally owning the frequency. Still a little early for the Asian and Pacific stations.
Weather has been mild, yesterday allowed a nice jog to the Veines lighthouse in 7 Celsius. Cooler, and a lot more wind today.
Lagt inn av Bjarne Mjelde at (UTC) 09:33 No comments:

Things did turn out quite well after we had checked the recordings. 980 KDSJ Deadwood SD, 1130 KWKH Shreweport LA, 1590 KWBG Boone IA and especially 1590 WVNA Tuscumbia AL were tonight's highlights - all except KWKH were new logs for me.
Other than that, we enjoyed a magnificent king crab dinner with cloudberries for dessert. We drank Calles Riesling white wine with the crab, and Poli grappa with the cloudberries. We're ready to hunt US daytime stations!
Lagt inn av Bjarne Mjelde at (UTC) 20:43 No comments:

Good signal levels from North America from yesterday evening, allowing for US Daytime stations to be heard. We followed the sunset path over North America but nothing much of interest was heard. Overnight and into the morning the signals were again very good but wide-spread so it was difficult to find new stations.
As of writing at 0928Z the west coast dominates, some GY stations like 1490-KCID, 1450-KONP and 1230-KKEE have huge signals. Tahiti noted on 738 just after 0800. The QDFA is still performing admirably. If it wasn't for its somewhat reduced sensitivity on the lower part of the MW band, we wouldn't need the beverages at all.
We're hoping for good signals from the Pacific the next few hours.
Cloudy with sunny spells, dry, a light breeze and 3 degrees Celsius.
Lagt inn av Bjarne Mjelde at (UTC) 09:24 No comments:

Nice signals from many Hawaii stations. A new Alaska log for us: 1430 KMBQ Wasilla nice signal at 1400Z with their TOH ID. Only minutes before KBRC Mount Vernon WA dominated.
Lagt inn av Bjarne Mjelde at (UTC) 14:18 No comments:

The KONG crew arrived as scheduled 1148Z today. As we unpacked, we enjoyed signals from 1500 KUMU Honolulu HI and 1035 Newstalk ZB. The first day starts up in a light manner radiowise, as we will attend the biweekly Pub Quiz at Neptun Pub at 1900.
Conditions last night was a bit up and down due to the disturbance, short flashes with good west coast conditions. At the time of writing (1330Z) lots of Hawaiian stations with good signal strengths.
Lagt inn av Bjarne Mjelde at (UTC) 13:28 No comments:

Not much to report since I haven't checked much. OJ heard 1240 KNRY Monterey CA at 0900Z yesterday. This morning, conditions appeared to be quite good but westerly oriented with 1230-KKEE, 1240-KTIX and 1490-KEYG at 0700Z. At 0800 the band was empty! It turned out it was not a faulty antenna but a sudden disturbance. At 1130 the band is slowly returning to normal. Right now I'm listening to 1500 KUMU Honolulu HI with fair strength, and Japan is getting stronger too.
Less than 24 hours until the rest of the KONG crew lands on ENBV.
Lagt inn av Bjarne Mjelde at (UTC) 11:28 No comments:

Been away a couple of days, so I don't know much about what's heard, but OJS reports that Tonga-1017 and Marshall Islands-1098 were well audible today. The internet connection with Kongsfjord was lost at 1223Z today. I don't know if it's the modem or the line. We'll see by Thursday.
Two veries: 1210 KTBK Auburn WA and 1350 WWWL New Orleans LA. Entercom-owned, like its big brother on 870, WWL. Their nighttime pattern isn't exactly favourable.
And now only three days until Odd-Jørgen Sagdahl, Arnstein Bue and Tore Johnny Bråtveit arrives! I'm in heavy shopping mode.
Lagt inn av Bjarne Mjelde at (UTC) 18:43 No comments:

Not much to report. From the October 3 opening, two new stations were found, 1370 KGNO Dodge City KS and 1600 WRPN Ripon WI. Today very good signal strengths, but conditions were "wide", allowing the dominants to - well - dominate. 1210 KTBK Auburn WA with its new (since when?) 10 kW night power was quite strong. Spoke with Mika Mäkelainen on the phone from Lemmenjoki this afternoon; his impressions were the same. Quite a few Hawaii stations audible around 1300Z.
A few new veries lately: 1600 WRPN Ripon WI, a very friendly email from 1350 KCAR Clarksville TX and finally 1130 KWKH Shrewport LA.
Lagt inn av Bjarne Mjelde at (UTC) 17:52 No comments:

Only a small fraction of tonight's recordings have been checked, still a few new stations for me, like 1130 KWKH Shreweport LA, 1350 KCAR Clarksville TX, 1350 WWWL New Orleans LA and 1450 KZZJ Rugby ND. Romanticas on 930 may have been WKY, the way conditions were last night.
Nothing of interest during the afternoon here, only modest signals from Japan and nothing (at least noteworthy) from Down Under.
Lagt inn av Bjarne Mjelde at (UTC) 16:08 No comments:

More from Down Under! We are monitoring the BOH og TOH and enjoying periods with excellent signals from Newstalk ZB 1035 kHz in between. Listen to this! Or click on the recording in the box.net box below.
Edit: The Newstalk ZB file was recorded from the Perseus SDR in Synchronous AM mode, bandwidth 5.55 kHz. Antenna: QDFA.
Lagt inn av Bjarne Mjelde at (UTC) 15:29 3 comments: