So I decided to buy one. At 780 EUR + Norwegian VAT I could easily buy three RSPdx for one S3. And probably fit six of not more of them inside the S3 cabinet. But it was intriguing to test a proper 16-bit ADC SDR with HF and FM coverage and 24 MHz sampling rate.

The money drain didn't stop there. To be able to sample 24 MHz, none of my PCs are even close in performance. So I bought a Lenovo ThinkCentre desktop which set me back as much as the S3. The all-cores passmark is 13000-ish so it's reasonably quick.

The S3 arrived two days ago, one day after the Lenovo. I set up the combo at my home here in Tana, where I have no antennas, for testing performance and compatibility. They seem to work very well together. I have been running the S3 with SDR Console at 24 MHz sampling for 30 hours now, with no issues at all. CPU usage is quite stable around 34 %. During IQ recording, the load increases to 40 %.

During the Easter holiday I expect to have lots of time to explore the SDR in depth, including doing the mandatory MW sensitivity measurements. Below some photos from unpacking and first run.

July 2010: I received my first Winradio G31DDC from Waters & Stanton in the UK. I was looking for an SDR at least as good, or preferably better than the Perseus SDR, and this was it. Armed with a 16-bit ADC and slightly better sensitivity, it was Winradio's attempt to cater for the DX community rather than professional customers.

I didn't fancy the graphical user interface though. And what's worse, for one used to making IQ recordings, both live and scheduled, its software failed miserably. First, the IQ files could not be date- and timestamped. Why on earth....? Second, the scheduling option was audio ONLY! Why, oh why.

Later on, the G33DDC appeared which solved these "issues", but at more than double the price. The GUI itself was still not what I wanted, and no third-party software was in the pipeline. Then came the Jaguar software for Perseus, a giant leap for DX-ers who want to schedule, record and analyze IQ recordings. So, both Winradios were sold.

Fast forward to 2021: SDR Console and Simon Brown decided to work on the G31DDC. By coincidence I had a G31 belonging to an estate, waiting to be sold, and decided to wait out Console support. I got a beta version in mid-February, and it worked well, although without an antenna. When I drove to the KONG HQ last weekend I brought the G31DDC with me, and got it playing with a beverage antenna.

Let there be no doubt: This is a first class SDR. Console is a very good overall SDR software, and the combo works extremely well. Since I DX the MW band almost exclusively, the Perseus/Jaguar combo will remain my favourite setup. But for most DX-ers, the G31DDC + Console combo is hard to beat. Not least because it's an active product from an active manufacturer who is in the radio game for the long run.

And support for the G33DDC is nigh! 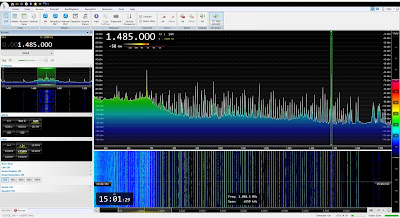