Another day with more of the same as the day before. Still no proper daytime openings towards the Americas, but there was a small time window for stations like WLNL-NY 1000, WPLB-NY 1070, WDZY-VA 1290, WHGT-MD 1590 and a few others. Early in the morning we also noted KIHU-UT 1010. Propagation lasted well into the afternoon with common stations for that time period, such as KEYG-WA and KDBM-MT 1490.

The Pacific islands were again early, and strong, as this trace of Kiribati-1440 (red circle) shows. Nothing new though.

Then at 10:36Z we got a message from Mika in Aihkiniemi to "Please try listen to V7AB if you can now". Whazzup??? So we tuned to the super-strong V7AB Marshall Islands 1098, where the announcer aired greetings from Jim and Mika to us! Listen to the last part of it here.

Meals!
This time we got the meals procedures back on track. For starters we had a modified Västerbotten pie where the original Kalix roe (hard to find)  had been replaced with Arctic roe from lumpfish.

The main course was Veal shanks barolo, cooked with tomatoes and three bottles of Barolo red wine for 7-8 hours. The selected wine was.... Barolo! But not just any old Barolo, it was the Fenocchio 2011. 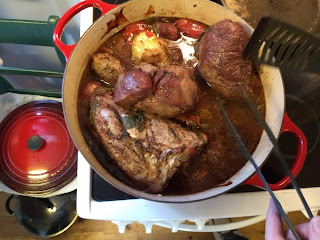 For dessert we had properly made Créme brûlée and Amaretto. And Grappa.

Weather was mostly calm, partly cloudy and light rain showers from the northeast throughout the day. Maximum temperature was 4 Celsius. It's starting to cool off a bit now, so we will likely see more wind, snow and sub-zero temperatures towards the weekend.