There's been a few DX tests this season, and rather by coincidence I stumbled upon another one the other day. The IRCA and MW Circle reflectors reported that Mittelwellen-Sender Joe, transmitting from Erlangen in Germany on 1485 kHz, was sending periodic 1000-Hz tones - one second on, one second off.

Now, that sounded like a nice challenge. The first evening I tested I heard the transmission right away at the KONG HQ, and a very good signal at Smøla. DX-ers in Scoland and Ireland also reported the signal. The initial enthusiasm faded a bit when I later learned that the effect was in fact 100 watts, not 6.

So I decided to try again, and focus on the period before Germany's sunrise. I monitored the signal from 04:58 (100 watts), and then at 05:01:35 the relatively strong signal disappeared...almost! A very faint signal was still there, and I got my 6 watts, 2540 km reception! The image below shows the weaker tones above the red line as the signal dropped.

I chose the 540-metre Asia/Pacific beverage antenna for the reception, because its back lobe crosses western Europe. Interference mostly from SER Radio Santander.

More informasjon about Joe can be found here.

Ordinary programming may resume soon, so I don't know for how much longer it's possible to hear the tones 24h. The tone will be broadcast from Midnight to 05:00 (presumably UTC), but at what power I don't know.

I really think this 1000-Hz test should be able to travel quite far at 100 watts. The eastern shores of North America should be possible. At least worth a try. 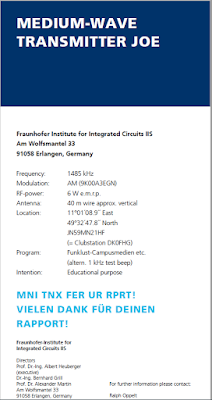 WCPH is a 1-kW day, 109-watt night oldies station in the south-east corner of Tennessee, not far from Chattanooga. The station owner George Hudson agreed with the NRC/IRCA Courtesy Program Committee to set up two two-hour DX tests with their day facility. The first on December 26, the other on January 2, both tests running from 07:00 to 09:00 UTC.

1220 is certainly not the easiest frequency with powerful stations like WHKW Cleveland, CJRB Boissevain and often XEB Cd. Mexico with potentially strong signals. 1000 watts isn't much to compete with. But we know that morse code and sweep tones are extremely efficient methods if you want to reach far.

Reception of the December 26 test was a failure. Geomagnetic conditions were very poor. If I remember correctly the only signal we heard was a very faint CJRB.

Propagation forecasts for January 2 were far more optimistic though. And true enough, at 07:00 we did hear the sweep tones on our Smøla island rigs. Later on, sweep tones and morse IDs were heard at the KONG site, and with quite a bit better signal than Smøla. At KONG, there was little interference except CFAJ fading up a few times, and CJRB/XEB lurking in the shadows.

The distance to Smøla is 6660 km, to KONG 7128 km. WCPH was also heard in Lemmenjoki, Finland, and Scotland. And maybe elsewhere in Europe for all I know.

Many thanks to the CPC and George Hudson for making this opportunity to catch a new station! I hope George is satisfied with how his station got out. A good start for 2021, DX-wise!