First TA Signals (and then some)

First signals from over the pond were recorded on Aug 29, and Argentina was the first country this year. The day after saw nice signals from the usual ARG stations, like 1110, 1190, 1270 and 1350. A little Cuba and Brazil mixed in. Nothing from North America so far.

The above were logged on the 310 beverage, which went quiet during yesterday. I went out to see what was wrong. It was totally devastated. Including extremely solid supports, thrown around as were they matches. In the middle of it all: A very grumpy reindeer bull, his antlers entangled in beverage stuff. I managed to cut as much of the wire as I dared, and off he went, leaving me to pick up the pieces.

Today the 310 is up and running again, in the hope that Mr. Reindeer has learned a lesson. Actually he shouldn't be here at the coast at all now, he should be up on the plains looking for reindeer girls. Maybe he missed the biology class.

It's the first reindeer catch since I started erecting beverages here in 1997.

A new radio project is underway. I will be going to East Africa in February and thought I'd bring a small radio with me and do some MW band scanning. So I ended up with the Tecsun PL-380, which fits "small" comfortably. But I need to rely on its internal ferrite rod for MW reception, and as we know small is not good for ferrite rods. So I got two 7.5" ferrite rods from Amidon yesterday, and I'm waiting for some Litz wire to complete the project. Thanks Gary DeBock for the write-up on this mod. The picture shows the difference in size between the stock ferrite and the new one. Now I only need to find out how to make it fit in the enclosure... 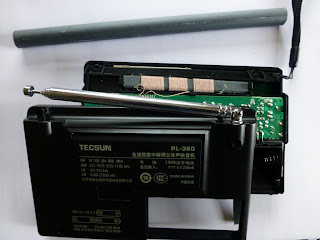 The 50-degrees beverage has been remarkably quiet since noon on Saturday. Today, after being alerted about DU conditions in Aihkiniemi FIN yesterday, I checked it via remote control at 1900Z. Sure enough, ABC Adelaide 891 with a nice signal! Earliest ever confirmed DU in Kongsfjord! Interestingly enough, nothing (except a Greek pirate) was audible in the X-band.
Lagt inn av Bjarne Mjelde at (UTC) 20:41 2 comments:

Well I was wrong. The noise I experienced on the 50 degrees beverage had nothing to do with insufficient grounding. The noise just happened to be gone when I tested after the grounding work. It later returned, and was present almost every time I checked the past week. Before noon on Saturday however the band was quiet again, and it is still quiet on Sunday morning. Problems of intermittent nature are indeed difficult to pin down. And conclusions are easily made on insufficient evidence.

During Friday evening (when the noise was definitely there) I analysed it to the best of my ability. It appears to start around 400 kHz, and above 4 MHz it's not noticeable. It has its peaks and nulls as can be seen from the 4 MHz DDC spectrum below but they are not completely evenly distributed. What was really quite surprising was that when I engaged the G33DDCs Noise Blanker, it all but removed the noise. Alas, the Perseus NB is much less effective so unless I'm able to remove the source, the G33DDC is the only SDR I can use with the 50 degrees beverage.
I am now 100 % certain that the source is not within my house or any of my equipment. There aren't many possible sources within a reasonable distance here, but 3 km away on the back lobe of the beverage there is a power plant transformation station. I walked around the station on Saturday with a Degen DE-1103, but its ferrite antenna didn't pick up any particular noise.

The 310 degreees beverage was erected in beautiful late summer weather yesterday and works as expected. The hope for early trans-atlantic signals was shattered by two M-class flares yesterday evening followed by a proton event.

And with it comes antenna preparations. The first beverage out was the 500 meter, 50 degrees Asia/Pacific beverage. It has been an exceptionally quiet antenna in the past, but last autumn we noticed noise coming and going. It only periodically disturbed DX-ing though. However this was the spectrum that met me after I connected yesterday:
Of course, this was not good. The noise band seemed to come and go at rather random intervals so I was relatively sure it was not man-made. Getting a good grounding at the starting point has proven to be a bit tricky, so I decided to investigate this lead first. Equipped with a sledge hammer, extra copper rods and leads I reworked the grounding system with four rods into the rather stony ground. When I got back I found this spectrum:
Now we're talking! This is just about as quiet as it can get. You will notice the horisontal lines on parts of the spectrum. It's Loran C noise, and reducing it any more than I have already done isn't possible without switching off the station.

Despite the noise yesterday evening, I was able to hear DX as several Japanese MW stations were audible with good levels, especially JOHR HBC Sapporo 1287.

To round this off, a couple of pictures of the starting point and how the antenna stretches towards the shore on the other end.