Spotting Tonga in the Afternoon

Tonga Broacasting Commission, A3Z, recently extended their broadcasting schedule to 24 hours. In Kongsfjord, the station has been a frequent guest on 1017 kHz early in the day for many years. However, it requires good conditions to come that early at this time of the autumn, and this year in particular the early hours have been eerily silent.

Today, the 10-kW transmitter  with its roughly +5 Hz offset was noted with a weak carrier at 11:30 UTC, and snippets of audio at 12:30. The Jaguar spectrum followed the signal at  mostly very low levels throughout the day. Then, prior to 17:00 the signal suddenly increased significantly. At the full hour their BBC World Service news bulletin was indeed very strong, and dominating over the usually strong Asian stations on 1017. Was I surprised? Very! Then a few minutes after, the signal started to fade, and eventually disappeared.

But Tonga sunrise today was at 17:38, and pre-sunrise signal enhancement is a well known phenomenon especially among radio amateurs. So a peak like that is really what you might expect, or at least hope for.

Curious if this was a one-day only event, I scrolled back the Jaguar spectrum a few days. And yes, although weaker due to propagation, the Tonga signal had the same characteristics several days back. 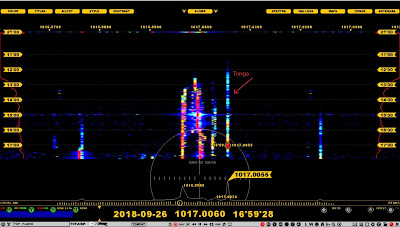 And to give you a perspective of Tonga in relation to Kongsfjord, and more importantly, the sunrise, see below. 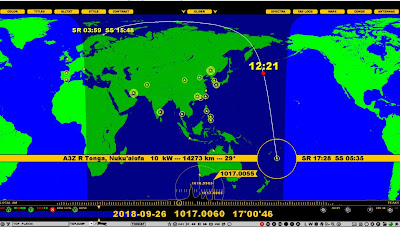 But this "news" about a late Tonga peak might not be news at all. According to the Pacific-Asian Log, the previous sign-on time for Tonga was 16:50. So, we should have noted the signal before they went 24 hours. But since they were so "easy" to hear before close-down, we never bothered to check, did we. Or maybe someone did?
Lagt inn av Bjarne Mjelde at (UTC) 19:59 No comments:

During disturbed solar weather on Sept 25, there was a nice and concentrated peak towards a rather small area around Illinois and Missouri. WSBC surfaced on 1240 with a readable station identification. Email verie received later that day.

750 was heard a couple of years ago. As for 850 - well nothing is impossible during a good daytime opening! 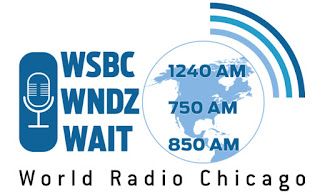 Heard one afternoon a couple of weeks ago with BBC World Service programming. An audio file was sent off to the v/s who confirmed that it matched their off-air logger. He further explained that the BBC service they relay is specially provided by the BBC from New Zealand. It is often different to World Service and has different latency, so even when the programme content is the same as World Service, they are readily identifiable.

A Stormy Radio Night With a Twist

Last night, K-indices rose to around 6, or a G2 Geomagnetic Storm. The MW band was dead most of the time - except an hour or so between 01:00 and 02:00 UTC. The Jaguar spectrum below illustrates very well how the band woke up from nothingness to many stations on each frequency for a short period.

So, even during solar storms, you should check your radio! Unfortunately, on 1570, the usual dominant CJVL wouldn't give way to other stations.

Last day! Unfortunately, Ole had to leave us this morning. He'll be back in October! Today we prepared the unattended Perseus facility at Mount Loran, which will hopefully run continously, save weekly battery replacements, until October 18.

Nothing really spectacular to hear, but great signal strengths both in Kongsfjord and Mount Loran.

There were "complaints" yesterday that we hadn't mentioned any beers we had tested. Well, sorry about that - at any rate here are two of today's top picks, our old favourite, the Sierra Nevada Torpedo IPA, and the Norwegian Grünerløkka Geriljagress (guerilla grass, sorry, no idea what it means but it's a superb beer) 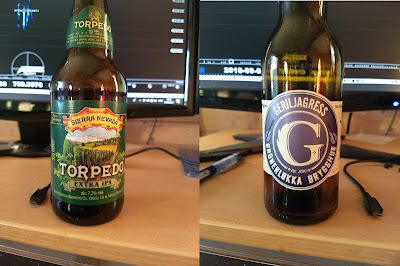 Weather was absolutely fabulous today. I'm preparing for the Oslo half-marathon the coming Saturday, so I enjoyed a 14-km jog in sunny and calm weather. Temperatures up to 10 Celsius. Photo below is from the former Loran C site (named Mount Loran by us), overlooking the Kjølnes lighthouse. 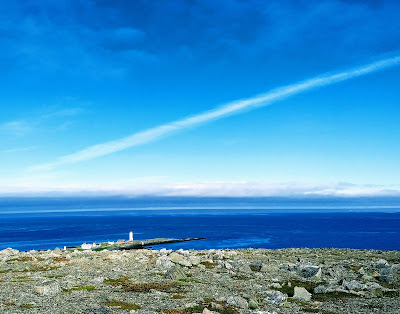 OJ and TJ will leave Monday morning, but will return in less than six weeks for more radio listening, beverage testing and good food.

Another beautiful day with 11 Celsius maximum, dry and sunny spells. The photo below was taken in the afternoon, showing a flock of goosanders (or common mergansers) in my bay. 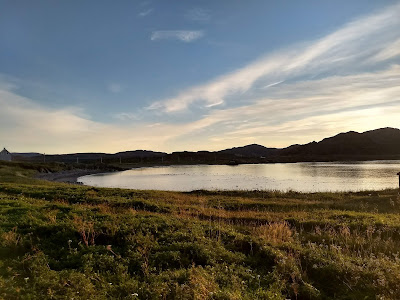 Final internal preparations for the coming winter were done, as OJ, Ole and TJ set up their PCs, SDRs and hard drives in the living room. Overnight recordings from Mount Loran were collected, and showed clear improvement over the previous night. Brief checks revealed stations like WSFC Somerset, KY 1240 and WROK Rockford IL 1440.

Before dinner, we enjoyed specially imported exquisite chocolate from the UK (courtesy TJ). 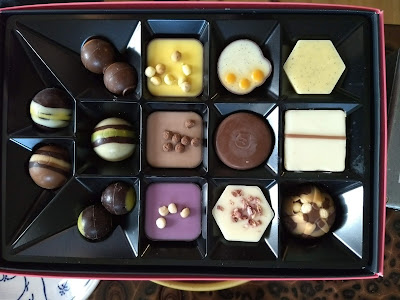 For dinner we had baked salmon and pesto, with pasta carbonara. Chocolate pudding with custard for dessert, and a specially purchased aquavit from Gudbrandsdalen, Ole's home turf.

To end off this report, a photo of a setting sun over the 70-metre KongSDR internet receiver antenna. 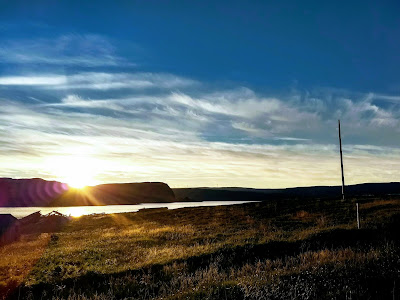 The Mount Loran Perseus recordings were collected today, and as expected, the noise levels are very much lower than Kongsfjord, allowing for more stations to be heard. Nothing really spectacular this time, but several not-so-usual stations were noted. Signals from North America only started to fade up after 00:30 UTC, and sunrise was at 02:40. Last signals faded out around 03:30.

In the afternoon and evening, the usual mix of Australian stations were audible, such as 594, 729 and 891, and even 5AU Adelaide 1242. Philippine stations were very strong.

The 340 degrees beverage turned out to be extremely noisy. A possible culprit was an un-un on the feedline. At any rate, by-passing the un-un seemed to get rid of the noise.

Dinner today was reindeer steak with a paste of root vegetables. The steak was not quite as good as expected, but no leftovers. A very nice selection of cheese were

Weather today was a bit cooler than yesterday with 9 Celsius maximum, but little wind, and dry.

Today's picture is from one of the beverages. Strong supports are needed if the antennas are to survive the fierce arctic winter. 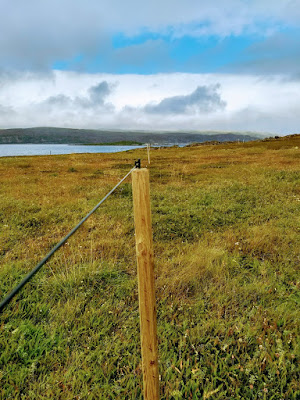 Recently added features, such as the TDoA service, WSPR Autorun, configuration forWJST-X and DRM are channel intensive. When these kinds of connections are made, channels RX2 to RX7 (audio only) will be used first. RX0 and RX1 will be available for normal browser connections where it's desirable to view the waterfall.

While it is always cool to see the waterfall, in many cases it's not really necessary. Please email me if you have comments to this setup. It is always reversible. Below is how an audio-only display is shown. 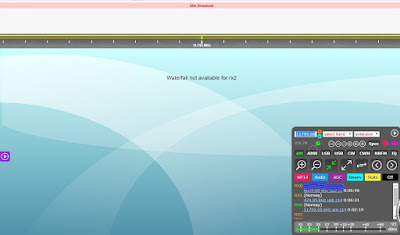 This mini-DXpediton will last from Thursday, September 6 to Sunday (or rather Monday morning). Antenna works today.  OJ and Ole took on the challenging task of erecting the 1000-metre experimental beverage at Mount Loran, together with the necessary hardware and remote control setup.

In-house setup is challenging as well, with four DX-ers wanting continous access to four beverage antennas. But we've done this a few times before (35 to be exact), so it's mostly routine.

While OJ and Ole were away, I replaced supports for the 340-degrees beverage, and also elevated it. Stunning September weather. The picture below is looking southwest from near the end point of the 340 beverage. Nice, huh? Today was calm, sunny, maximum of 13 Celsius.

Afternoon conditions were relatively uninspiring, except Philippines showed up on somewhat unusual frequencies, like 1440. 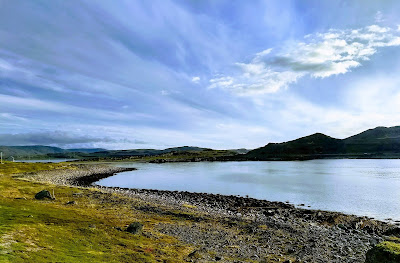 As always (almost) on the first day, the host tries to impress the gang with home-made fish gratin, and they say they approve. It's an easy dish with super-quality haddock, bacon, macaroni, chopped carrots, fresh ginger, onion and chopped leak in basic white sauce. Generous amounts of nutmeg for flavour.  Baked for 45 minutes at 200 Celsius. For dessert we enjoyed Tartufo, a delicious Italian-style chocolate mousse.

We have yet to put up the dual 340 degrees beverage, towards western North America. Half of it has been rolled out, but not connected.


All have loooong DX-Engineering feedlines into my shack, where they first enter a DX-Engineering preamp, followed by a 1:8 MiniCircuits splitter and then distributed to the four radio operators.

There are some interesting differences in the antenna's noise levels. So I set up a test during daytime, when there were no signals on the MW band, to illustrate this. I used Perseus SDRs at 2 MHz sampling rates, centered on 1000 kHz, and SDR Console v. 3.0.3.

First off, the oldest "design" of them all, the 310 beverage aimed for North America. It points directly towards a wind park, comprising 15 Siemens turbines each with a capacity of 3 MW. The noise below 800 kHz is typical for these turbines, this "fingerprint" is also noted by Swedish DX-er Stefan Wikander. I suspect the peak on just below 1400 to belong to the same noise source.


Generally, the noise level is quite high, and a lot higher than at our test site Mount Loran, where we put up a temporary 1000-metre beverage at roughly the same direction.

The 50 beverage is very quiet. When we first erected it several years ago, we heard absolutely nothing when we tested it. We thought we had forgot to connect it. We hadn't. Since then, increase in general noise levels have affected it a bit, but it's still very quiet. We can see the wind turbine noise on the spectrum, but the antenna is grounded on its back end, and pointing slightly away from the turbines, so the effect isn't too bad.


The 80 beverage was new last year, and is somewhere in between, with regards to noise. The wind turbine RFI is clearly visible from 700 kHz and downwards. Apart from that, I don't really see why it should be so much noisier than the 50 beverage, so we might have to look into it.


And while we're in measuring mode, we might as well check the 70-metre, N-S longwire for the KongSDR . It is placed some 30 meters from the house:


It's nice and quiet in the LW band and lower MW, but otherwise not particularly quiet. It should be noted though, that the longwire is connected to a 13-dB Wellbrook splitter/preamp. And on the SW bands, as should be expected from a longwire, the noise level is around -120 dBm, which is quite good. The longwire certainly "hears" more on SW than the beverages do.

One would expect, or at least hope, that a super-rural area like this would be super-quiet as well. But just 4 km away is a major grid hub with several 20 kV, 66 kV, and 132 kV lines going in many directions. The wind park makes its own noise. And although we are on constant red alert regarding in-house appliances, we may have undetected noise sources here as well. Or maybe our neighbours 200 meters away.
Lagt inn av Bjarne Mjelde at (UTC) 16:11 No comments: