Email from Tom Hodgins (GM at KUJ Walla Walla) this morning confirmed my reception of KVAN last Sunday. Finding a route for directing a reception report to KVAN wasn't straightforward, since the station is brand new with no web pages available and not much information elsewhere, but I relatively early found that KVAN and KUJ were co-owned with their HQ in Walla Walla. So I sent the report to KUJ.

I had planned to take Friday off and spend the entire weekend in my DX shack in Kongsfjord; however weather took a turn for the worse Thursday when heavy wind and snow created a whiteout. All roads were blocked as well so I had to delay the departure. Friday wasn't as bad but they had just managed to get the roads opened when on Saturday another whiteout set in... finally on Saturday evening the weather had cleared enough for me to drive. I hear from other locations in Northern Scandinavia that I hardly missed any interesting DX. At the time of writing: Clear sky, -8C but a fresh breeze that makes it feel a lot colder.

I had two goals for the weekend: The new KVAN Burbank WA 1560 station, and the KRSN Los Alamos NM 1490 DX test. KVAN is only 1.6 kW nights but the nighttime lobe is directed towards me, and it had already been heard in Sweden and Finland so I thought I should have a good chance of hearing it. I did... Sunday at 0623, just minutes after I got on the frequency, I heard a clear "Oldies 92.1" ID. KKAA Aberdeen SD was rather dominant though. It is going to be a regular catch at least up north.

No sign of KRSN though, on any of the three full hours. Conditions had a northerly and easterly dominance (typically CKEC-NS dominating 1320 and WDDY-NY dominating 1460, to give a few examples), so the prospects for hearing a NM station that morning weren't good.

Update at 1200 UTC: But I did see the sun for the first time since November on my drive home! The Polar Night is over.
Lagt inn av Bjarne Mjelde at (UTC) 07:41 5 comments: 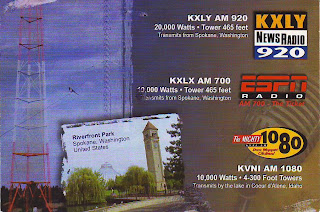 Email reports and veries are fast, efficient and put a lot less strain on the household budget. But nothing compares to a proper QSL, which I received from Tim Anderson at KXLY Spokane WA 920 today. Enjoy this! Thanks Tim!
Lagt inn av Bjarne Mjelde at (UTC) 12:19 No comments:

840 The Wolf, formally known as CKBX, had a brief and unexpected appearance during the KONG14 DX-ped on Oct 10. A new log for me. I received a friendly and detailed email from Lynn Desandoli at the station this morning. Lynn also informed me that Larry Rode, who does "The Rode Show" weekdays from 6 to 10 am, played my audio clip on the air. 100 Mile is located in BC's central interior and CKBX plays "Modern Country & Best Southern Rock" according to their website.
Lagt inn av Bjarne Mjelde at (UTC) 05:54 No comments:

Friendly email from PD Sue Storr today confirmed a rather old (2005) reception of CHOK. I just haven't heard them with good audio since. CHOK used to be Hometown Radio with News, Talk and Sports, however they have recently flipped to a Country format and what you see above is their new logo.
Lagt inn av Bjarne Mjelde at (UTC) 16:46 No comments:

A few of the most noteworthy loggings are listed below. Sorted only by frequency, not by continent and frequency as is usually the norm. Some good ones from the Americas, and some really good ones from the Pacific! Date format is dd.mm. Times are UTC.

Email from PD Tom Sebourn today confirmed my October 23 reception of KGOE. At the time only two stations were audible on 1480; KGOE and KBMS Vancouver WA. KGOE's full hour signal was excellent, as acknowledged by Mr. Sebourn: "The sound cut you sent was better than any I have heard from that distance." There you go!
Lagt inn av Bjarne Mjelde at (UTC) 19:32 No comments:

Heard on Dec 26, 2005, my first logging of KTKZ. KRKO and KSRV aren't easy to get past when conditions favour the west coast. Very friendly email from CE Dave Fortenberry tonight. My third Sacramento verie and my 30th from California. Well worth a very small glass of Mas Amiel wine!
Lagt inn av Bjarne Mjelde at (UTC) 22:48 No comments:

Another October, 2006 logging, WFDF had a fair signal when they did their legal ID and I sent a recording to Station Manager Richard Padgen. A friendly response came - not in the usual form as an email, but as a comment to the 2KP post below! My first blog-comment verification! Very cool indeed. 910 was less productive than I had hoped last autumn - apart from the usual dominants CKDQ-AB and WSUI-IA there were few other signals.
Lagt inn av Bjarne Mjelde at (UTC) 19:55 2 comments:

Heard at 1500 UTC on October 18. Running ABC overnights but giving a regional "Radio New South Wales" ID insert on the hour. That's as close to a local ID one gets at night. Cameron Marshall is the Station Manager and Breakfast Presenter, and he confirmed my reception with a friendly email tonight.
Lagt inn av Bjarne Mjelde at (UTC) 06:00 1 comment:

Email from Tim Anderson tonight confirmed my reception of KXLY with the promise of a "proper" QSL in the mail. Though no rare guest on 920 over the years, in later years I have found them less common than they used to be.
Lagt inn av Bjarne Mjelde at (UTC) 02:17 No comments:

"Adelaide's 1395, 5 Double-A" was audible only a few minutes on Oct 16, but with good strength at that. Long time wanted. Email response from Mark Murphy at Productions tonight made it my 10th verified in-band Aussie! Before the start of this season I had three... and I still have reports not sent.
Lagt inn av Bjarne Mjelde at (UTC) 02:09 No comments:

Swift email from Pat Anderson this evening confirmed my October 12 reception. KWOK, running ESPN, had a period when it was quite exceptionally strong to be a 1 kW station. Moreover, it happened to be on the top of the hour when the legal ID came. Hoquiam is located just west of Aberdeen and is the smaller city of the two, and they used Hoquiam - Aberdeen in their ID.
Lagt inn av Bjarne Mjelde at (UTC) 20:57 No comments:

Email this morning confirmed my reception of 2RL 576. Heard during the extremely good AUS conditions we had on October 18. Richard Garcia at ABC said the engineers were highly amused at the rather unexpected growth in listenership, but also mentioned that the excellent conditions provided problems for the local AM stations "being drowned out at night by distant AM transmissions".
Lagt inn av Bjarne Mjelde at (UTC) 08:21 No comments:

The KONG14 DX-ped (6-13 Oct 2006) produced some interesting catches. Below are my most interesting loggings. Regular stations omitted. A full KONG14 log will appear when all participants have compiled their logs. Date format dd.mm; time is UTC.

Email from Randy Pugsley of Churchill Media today confirmed my reception of KZXR. First time heard in 2005, they were heard a couple of times in 2006 as well.
Lagt inn av Bjarne Mjelde at (UTC) 22:45 No comments:

I heard KTMT on October 12 with a "Radio Lazer, 580 AM" Spanish announcement, that is - it took a bit investigation to find out it was them. A very rare station, although it was heard by POS last autumn too. Email from PD Devin Harpole today confirmed my reception. Thanks Henrik Klemetz for transcribing the announcement for me.
Lagt inn av Bjarne Mjelde at (UTC) 19:36 No comments:

I've finished going through recordings and logs from the first days of KONG15, until 0600 UTC on Oct 18. Below is a list of the more interesting stations heard (commonly heard stations are omitted to make the list a more interesting read). Sorted by frequency only, not by continent as is usually done.

When I returned home from a 13-hour drive today I found an email from Marilyn at KELK, confirming my October 17 reception. Rather brief appearance at the time but a nice ID.
Lagt inn av Bjarne Mjelde at (UTC) 19:06 No comments: