KGMI is a station I wanted to catch, literally for decades. In mid-November, for once the dominant KCAM-AK was weak, and KGMI had a fair signal along with stronger KGHL-MT. Friendly email response last night.
The reception was just after KJRB Spokane's new very low night power (30 watts) had come into effect. This surely helped too, since KJRB used to be quite dominant during conditions like this. 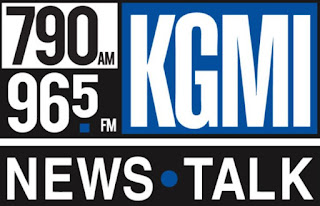 A KiwiSDR, first named KongSDR, later ArcticSDR, has been operative for the past few years using a variety of antennas. In anticipation of a new fiber connection, to replace the very expensive 4G connection, I bought another Kiwi a few months ago. From early autumn, the ArcticSDR has been connected to an antenna pointing towards Far East Asia and the Pacific. The back lobe should work well towards western Europe and South America. Another one, the KongSDR (reborn!) has been connected to a North America beverage, but not announced publicly to avoid too much usage of the 4G line.

Last week however, fiber was installed, and today I finally got time to reconfigure my KiwiSDRs so that both are public. See links to the right. So! I hope that I can wave goodbye to the somewhat flimsy 4G.

The new connection not only helps the Kiwis, but the main gear too, comprising PCs, SDRs and other equipment for three DX-ers in Kongsfjord. A total of 14 devices are connected to the fiber via ethernet. And although I haven't chosen top speed (yet), the current 50/50 connection seems to work well.
Lagt inn av Bjarne Mjelde at (UTC) 22:31 1 comment: