Not much is happening DX-wise during the light Arctic summer, but I had the opportunity to check out a dipole antenna sold by bonito.de, the NTi MegaDipol MD300DX.
For the time being, you can check it out yourself on my KiwiSDR, see link on the right hand side.


Beverage antennas are the norm at my KONG (Kongsfjord, Arctic Norway) location, because I and my co-users are exclusively MW DX-ers. For general listening, especially on SW, other antenna designs may be better, and for some time I have had a 70-metre longwire up as an all-purpose antenna for use with my KiwiSDR. Many years ago I tested a Mini-Whip antenna, and also the venerable Clifton Labs Z1501 active whip. Two years ago I bought a Wellbrook ALA1530LF for noise detection, and made a comparison with the longwire.
There is no doubt that a properly installed longwire antenna is very efficient on a broad frequency spectrum and may be the preferred alternative if space is not a limiting factor. But often space is restricted, necessitating more compact antenna designs.

Enter the NTi MegaDipol MD300DX. The MegaDipol, priced at EUR 400, comprises of an external antenna unit with two detachable 2.5-metre PVC-coated steel wire elements, and an internal power inserter which powers the external unit via the coaxial cable. The inserter can be powered from a 10-15 VDC supply, or from a 5 VDC supply such as a USB port with slightly less IP values. It is worth noting that the MegaDipol is an E-field antenna, so it should be placed in an electrically quiet environment. For omnidirectional reception, the elements should be placed vertically. 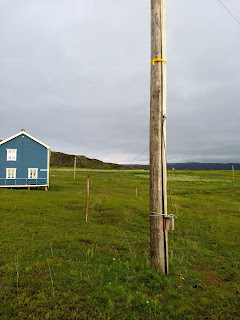 During the comparison, both antennas were connected to DX-Engineering 75-ohm coaxial cables. The longwire in addition had a matching transformer from DX-Engineering and was grounded on both ends. The MegaDipol was also grounded. The antennas were connected to two KiwiSDRs to facilitate accurate comparisons with identical hardware. Both feedlines had RF isolators inserted; The NTi GI 1000 galvanic isolator for the dipole, and the Wellbrook AFI-5030 for the longwire.
So, how does the MegaDipol compare to the longwire?

I was surprised to see the exceptional performance of the MegaDipol on Longwave. The lower down, the better. On my semi-local NRK 153 kHz, gain was typically 20 dB or more higher than the longwire, and the noise floor was a bit lower. So, all in all up to 25 dB better SNR. The difference decreased with higher frequency as my semi-local NDB “BV” on 399 kHz noted “only” a 10-12 dB difference in SNR.

While I had groundwave signals on LW for the comparison, summer daylight limited my comparisons to late evening skywave signals from the south – in the longwire’s lobe. Generally, the longwire does seem to have stronger signals, but the noise floor on the MegaDipol was lower. So, in effect, the difference was only slightly in favour of the longwire.

A bit like MW performance. The noise floor on the MegaDipol is lower, but so are signal levels. The net result isn’t very different, and one should note that the longwire’s length of 70 meters is very well matched with this part of the spectrum. A shorter longwire would likely not perform as well.

The MegaDipol claims to hear up to 300 MHz. I compared the MegaDipol with a 3-element FM antenna on the FM and DAB frequency ranges. On FM, I only had one rather weak Finnish station to compare. It was fair on the FM antenna, not heard on the MegaDipol. On a 225 MHz DAB channel, both antennas heard the signal, although the FM antenna had a 10-dB better signal level. Noise levels were identical.

By mounting the two elements horizontally instead of vertically, it is possible to add directionality to enhance or reduce signals from chosen directions. Late in the test, NTi supplied me of 5-metre elements, one of which was placed semi-horizontally (sloping from 2.5 to 1.6 meters) off the direction of a wind park a few km away. The signature RFI of the Siemens wind turbines, increased noise levels from around 750 to 500 kHz, was reduced into general noise level when I pointed the horizontal element in its direction. The signals from 153 kHz and 399 kHz were also reduced a few dB, although a deeper null might have been possible if I had placed the direction of the horizontal element more precisely.

It’s a shame that I don’t have the Z1501 active whip anymore. It would have made a very interesting comparison. Since the Z1501 is out of the equation and considering previous comparisons I did with the ALA1530LF, the longwire and the Mini-Whip, I can safely say that the MegaDipol is an excellent overall performer, and the number one compact antenna I have tested so far.  The price tag may be discouraging for some. However, the Wellbrook loop checks in at GBP 225, and even the cheap longwire’s matching transformer is USD 60. So, small, active antennas usually come at a price. Longwires are cheap – if you have the property to fit one.

"Z86" was heard with quite a good signal on my Perseus SDR at the Smøla island location in mid-February. My first-time logging of a station from Curaçao. I sent off a Facebook report at the time, and received a confirmation today.


A 30-minute, but strong Es opening yesterday brought 70 loggings from Denmark and Sweden. The opening was extremely narrow, comprising all heard stations within an 11 degrees bearing. Distances varied between 1065 and 1872 km.

I used a very modest 3-element FM antenna placed in the attic, connected to an SDRPlay RSP1A running at 8 MHz (6 MHz or so effective). I used SDR Console to decode and record IQ files to an external SSD for later playback.
If you want to look at the log, click this link.