Apparently, the problems I had with connecting to the S3 after a PC reboot or power down, have disappeared! Don't ask me why. It's the same PC, same USB port in use, no updates, nada. It would be only fair to update the article based on these findings. I also tested the FDM-SW2 software, and found it a lot more easy to record 24 MHz to a hard drive than with SDR Console. Still hoping for HDSDR support though.

Here is the revised article.

Last weekend I started taking down the beverage antennas. The NA season was mostly over, and the reindeer migration was underway, so the 310 beverage and the dual, staggered 340 beverage were reeled in and taken indoor. Asia and Australia are still heard a few weeks, so lowered the 50 beverage and the 80 beverage to the ground, basically making them BOGs.
Today the time was come to collect the 520-metre 50 beverage. It's a fairly easy job on wet, rainy ground because the friction is a lot less. It does weigh a bit though, so a wheelbarrow comes in handy for the 200+ metres transport to the KONG HQ.
The 80 beverage is still out, and will be the prime Australia hunter for the next couple of weeks. It is impossible to take down anyway because the last 30-40 metres of it is covered in a concrete-hard, 2 metres high snow drift.

First Impressions of the Elad FDM-S3

I've had the FDM-S3 a couple of weeks, and physically it is a totally different beast than for instance the SDRPlay RSPdx or Airspy HF+. For better - and for worse. Here are my first impressions of the Italian flagship.

(Updated May 2021)
Older SDRs aren't very stable. Well, compared to old boatanchors and even newer conventional receivers, +/- 1 ppm is excellent. But when keeping track of the offsets of stations is an important factor in MW DX-ing, we do not want the radios to drift. The Perseus SDR, though a magnificent radio in so many aspects, does drift. The stability vs. ambient temperature is +/- 1 ppm, while current SDRs do a lot better, 0.01 ppm or even 0.001 ppm with an OCXO and GPS reference.
At the KONG site, ambient temperatures routinely vary between 10 and 20 degrees C, and in extreme cases (also this winter), down to almost freezing. The Perseus drifts a lot during these temperature changes. We have seen 6-7 Hz drifting over a 10-15 degrees temperature change. Keeping track of offsets becomes challenging and manual calibration on known stable stations is often impractical.
The Bodnar Mini Precision GPS Reference Clock has gained some fame in the DX and radio amateur world for being a relatively low cost, high accuracy tool for reliable frequency readout. With it, you can insert a reference signal to your SDR.
There is no input for a reference signal in the Perseus SDR though. And since we only sample the MW band, we needed the reference signal to be present within the bandwidth we sample. The signal output from the Bodnar is +6 dBm even at its lowest setting, which would need some serious attenuation of the signal to avoid saturation. And with nine Perseus SDRs, did we have to buy nine devices?
No, we didn't. The nine SDRs are fed from four splitters, one for each beverage feedline. With the high signal level of the reference signal, it is in fact easier to wrap a wire from the signal output around the feedline. Induction rules, and the signal level is a lot lower. So, we still had to buy four devices?
No, we didn't! The reference signal is very strong, and the feedlines physically very close to eachother. So we followed a suggestion on the Jaguar Pro reflector and ended up with having to buy only one! A few turns of wire around each feedline provided us with a GPS reference on 1705 kHz for all our four beverages and nine Perseus.
It should be noted though, that our solution is based on the Jaguar software for Perseus - Jaguar enables us to manually or automatically calibrate readout. It should also be noted that the wire from the GPS is very much "live" when not attenuated, and will produce a signal, in our case every 1705 kHz up through the HF spectrum.
The device needs a 5V power source, which I found on a spare USB port on one of my PCs. The connection also enables communication with the device itself. The only other requirement is of course access to open sky for the GPS antenna. 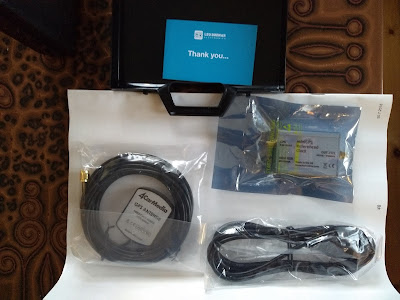 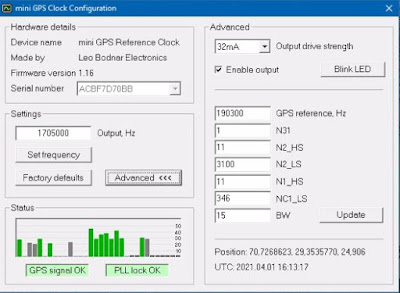 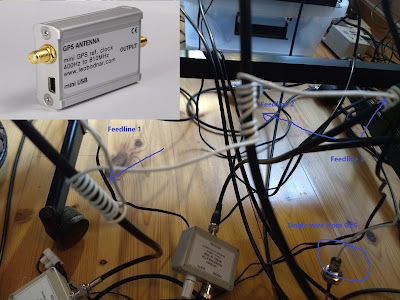