Conditions overnight were influenced by the coronal hole, which caused "dips" and "bumps" in the Yaslog. The most interesting "bump" allowed clear reception of 300-watts daytime, 2-watts nighttime WLDS Jacksonville IL 1180 for a few minutes, actually peaking above KYES!

Pacific signals started promising, and several NZL stations were noted around 10:00Z, especially good signals from Radio Sport 1332 and 1377. The band was noisy though, and the opening fizzled out anyway.

The only common meal we have on the KONG DX-peditions is dinner. Any other time of the day, anyone for himself. Ah, and yes, there is a Cafe Latte/Cappucino routine at 9 am as well.

However, since Jim was about to leave for further exploration and eventual return to Finland, we did a brunch with sourdough bread and whatever we could throw on the table. Which is usually quite a bit. So Jim left  us with a happy smile on his face and a couple kgs of  king crab to share with Mika.

Final repair works with the dual 340 beverage was done in the fine weather. Otherwise we checked recordings, such as a great opening we had on October 5 on Mount Loran.

And finally, dinner! Starter: Salmon sashimi with boiling sesame oil and roasted sesame seeds, chives and cilantro.  The main course was a leg of lamb, veeery slowly baked, for almost 9 hours! Served with a paste of root vegetables, and a rather spicy sauce with onion, leak and red chili. Red jelly and custard for dessert.

An audio file to show the signal strength of one of the common stations here: KSJB 600.

The picture was taken after the 340 beverage repair was done, around half an hour before sunset. Calm and dry, around 4 Celsius. Late October really can't get any better than this. 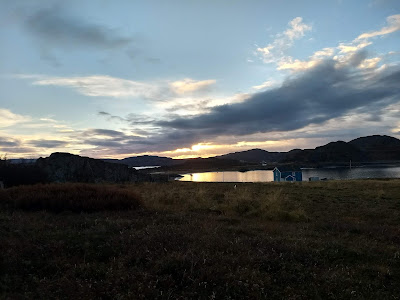