Preparations For The Upcoming Season

With the second weekend without the midnight sun, evenings are already becoming darker. Although it will still be three weeks until we can expect to hear any DX, preparations start early.

We are always experimenting with new antennas. This year we will test a replacement to the 340-degree beverage, namely a staggered beverage in roughly the same direction. Otherwise, the antenna farm will not change much.

Most of the time was spent indoor though, painting walls that haven't seen new paint since the mid-70's. The photos below were taken just after sunset on Friday. It is the northern side of the Veines peninsula. This is quickly eroding (in geological perspective) sand stone. 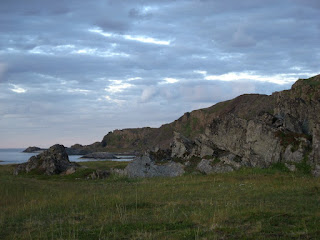 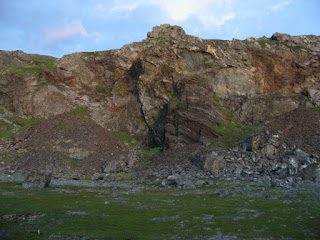 Take Your SDR To The Beach

Getting away from man-made noise has become increasingly important for DX-ers - and increasingly difficult. Going to the seaside or into the mountains can provide excellent opportunities for DX. But you need power! A laptop can last a night if one brings along an extra battery. However, feeding a 5V SDR from the laptop will either not work at all (too much current load), or it will drain the laptop's battery rather fast.

Battery packs have been around for a while. Some of them are quite powerful. After a quick search on Ebay I ordered a 11200 mAh battery pack which has two 5V outputs, rated at 1A and 2.1A. It came with a variety of adapters and connectors so one should have no problems to charge any mobile phone on the market today.

But the battery pack can do more than to give extra juice to demanding smartphones. The one I bought can power two SDRs! The Perseus draws around 750 mA while the Afedri has a modest 390 mA demand. At least in theory, this battery pack will power the Perseus almost 15 hours, and the Afedri almost 29 hours.

I don't know how much current is necessary to run the NetSDR - probably a bit more than the Perseus but less than 1A since I could feed all three of my 5V SDRs from the 1A output.

Before connecting the battery pack to my SDRs I checked the voltage of the DC outputs. I was somewhat surprised to see that they weren't quite the same. The 2.1A output measured 4.95V which is very good, while the 1A output measured 5.35V. That's a bit on the high side. Although all three SDRs worked with 5.35V when I tested them, I have decided not to push my luck. I'll stick to the 2.1A, 4.95V output.

Otherwise, the battery pack is a nice looking, small and light device.  The enclosure had FCC and CE logos on it, hopefully for a reason, and the price was USD 40 including air mail shipping from China. And they've even built a LED torch light into it. So you can search for the car keys you dropped when you erected the antenna.

Update Aug 11:
I let the battery pack feed the Perseus for most of yesterday, until only the last of the indicator LEDs were lit. How much juice was left I don't know. I was expecting (or fearing) that voltage would drop as the battery drained. However, the voltage reading of the 1A output was identical (4.95V) to the voltage when the battery was fully charged. So apparently, the battery is able to keep voltage stable for a very long time.

Thank you Takashi Kuroda for making me aware of these devices.
Lagt inn av Bjarne Mjelde at (UTC) 06:41 19 comments: