You do it with a KiwiSDR and a beverage antenna!

For quite some time I've had some interest in monitoring low-band WSPR signals with my Kiwi. I have been restricted to 180 meters, because the most wanted 630 meter spectrum was covered with local PLC noise. Until recently. The band has now opened, so a few weeks ago I started monitoring the band a bit off and on, and noted Greece (5 watts) at 3,700 km as the most distant spot.

But I wanted to hear further away! The ultimate for me would be to hear what I hear on MW: Pacific. I was advised that Roger, VK4YB, just outside Brisbane, QLD, might be the best bet for hearing Australia. So we exchanged some emails, and he wanted very much to be heard in Europe as well. But then the computer part of my KiwiSDR broke down, so I had to postpone the project.

On Thursday though, the KiwiSDR was up and running again, connected to the 500-metre Asia/Pacific beverage. And today, at 1500Z, I logged three spots from 14,075 km away! And propagation was nowhere near outstanding.

So, what's next? Japan? Hawaii? If I want to improve my personal record, I need to hear stations further south in Australia, or in New Zealand.

And maybe, it might be worth exploring LF (136 kHz) as well? 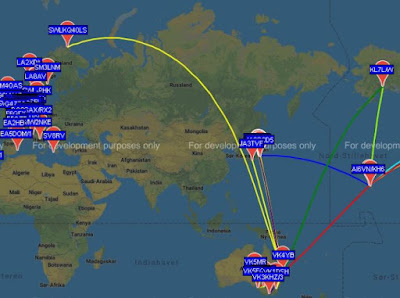 Cool! Someone will have to put up a station in Antarctica if I'm to reach the no. 1 spot though :-)

BTW: I just tried some low power WSPR and could leave a trace with you, just running 50 mW ERP , over a 2500 km distance.
By far no record, but not so bad for just 50mW.

Thanks Laurence. Would be cool to hear the west coast as well. Closer to winter solstice, DX is possible 24/7 over the pole, so I'll set up some listening sessions then.