AM Stations in Major Canadian Markets

Numeris, which monitors Canada’s media landscape, recently published their spring ratings in major markets, Vancouver, Calgary, Edmonton, Toronto and Montreal. I took a look at the numbers, to see how the AM stations fared. Only commercial and CBC stations are listed, so a religious station like CJCA Edmonton 930 is not there.

The news stations mostly seem to do well in these markets. The sports stations however, is a sad story. But I suppose they may be cheaper to run.

Will We See The RFSpace CloudSDR This Year?

The excellent 0-56 MHz Cloud-IQ has been out for quite some time, and will likely have HDSDR support in not too long, along with the NetSDR. Its "big brother", the CloudSDR, was expected to arrive not much later, but apparently has been delayed. Recent tweets from RFSpace may indicate that it may be on its way. Their web page state Q4-2018 for release.

The CloudSDR uses a 122.88 MHz ADC for the HF part up to 56 MHz, and a silicon tuner above, up to 1000 MHz or more. It may look like the HF is part is just another Cloud-IQ, but its spurious-free dynamic range is 7 dB better, and it has 3 dB better SNR. Sensitivity claims are identical.

There are separate antenna inputs for HF and VHF/UHF use. I  have been wondering if the CloudSDR would offer the same dual-antenna, software-selectable input as the Cloud-IQ has. The latest 3D model may suggest such a solution, as an "Aux RF" input has been added. It would be very cool to be able to change antennas via software

There are two other inputs as well, one for 10-MHz reference, and one trigger input, neither found on its smaller brother.

Input voltage will be 5VDC, and preliminary specs suggest that it needs 1.3mA, a little less than the NetSDR. The Cloud-IQ can be powered from a USB 3.0 port (even a good-quality USB 2.0 port), which makes it a perfect SDR for a mobile setup with a PC connected to a 12VDC battery. I hope that the CloudSDR's final design will require a little less current.

The MSRP is USD 999. We'll see if it ends up there.
All images from RFSpace. 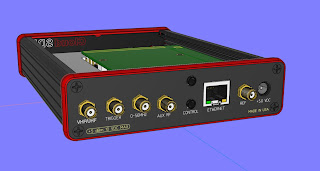 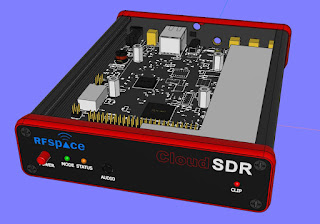 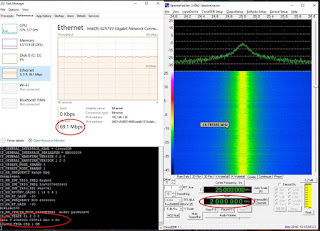