The MSI Wind Netbook And Perseus 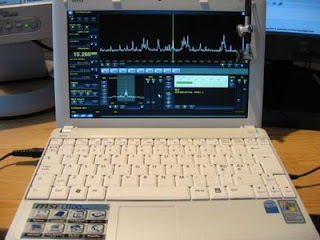 Conventional wisdom says that in order to run Perseus satisfactory, you need a PC as well equipped as possible. Preferably dual-core, lots of RAM and a good graphic board. Well, do you really. I travel a bit, and I wanted to replace the rather heavy Dell Inspiron with a smaller travel companion. After a bit to and from, I decided to settle on the MSI Wind. It uses Intel's new Atom 1.6 GHz processor, has 1 GB RAM and an 80 GB HDD. The display is 1024x600 pixels over 10.1”. It weighs a little over 1 kg with a three-cell battery included. It is really, really small, although somewhat bigger than the Asus eee series. The Wind is available in black, white and white with pink cover.
But the early eee’s use Linux don’t they, and so do the new Acer mini-laptop. I wanted Windows, and the Wind is equipped with XP Home. For more information please do an internet search. Interestingly enough, the keyboard is quite large, and I have little or no problems writing with my touch method, although the speed is a little slower than with a larger keyboard. The keys are responsive and with the ”correct” tactility, at least to my taste. Battery life isn’t out of this world with around 2.5 hours on the three-cell battery, but a six-cell battery is supposed to be available in September.
I was lucky enough to have one of the first four Winds to arrive in Norway. Unfortunately all four were pink but I can live with that.
The MSI Wind is not primarily going to be an SDR PC, but I was curious about how it would perform. After all, an SDR and a mini-laptop look like an ideal pair if one wants to travel light.
The SDR-IQ
I didn’t expect any problems with the SDR-IQ since the IQ’s hardware demands are modest. So the conclusion is simply this: It works.
The Perseus
The Perseus in its current state can demodulate 800 kHz, which is of course quite a bit more than the IQ’s 192 kHz, and with a higher bitrate in addition. Another thing about Perseus is that the display is fixed size, and quite a bit larger than Spectravue (unless you maximise it of course).
The Persus’ width fits exactly with the Wind, but the Wind’s display is a little too low for the Perseus to fit vertically. But as long as the task bar is minimised, you get access to all command buttons and there’s really no problem using the software.
So what about demodulation? 100 kHz: No problem. 200 kHz: No problem. 400 kHz: No problem! 800 kHz: Ooops… it does still demodulate, and recording is possible (as well as playback), but I noted that the signals were rather distorted. I had a couple of other programs open at the same time (Messenger and Opera).
Conclusion:
It is indeed possible to use the MSI Wind with SDRs. But when using it with the Perseus, 400 kHz seems to be upper limit.

Update 1:
You can in fact change the display resoluiton from 600 to 768 pixels vertically by going to Display Properties -> Settings -> Advanced -> Monitor, and uncheck "Hide modes that this monitor cannot display". You will need to scroll up and down with your mouse/pad to show the hidden areas, but this may be the way to go if you want to run the Perseus on the Wind.

Update 2:
After downloading the latest Perseus software (version 1.1b), I was actually able to demodulate and record 800 kHz without problems. Typical CPU load in demod mode was 35%; in recording mode 40-50%. This is very good. The MSI PSU is a rather noisy one, however it should be tolerable during nighttime DX when the signal levels are high.
Lagt inn av Bjarne Mjelde at (UTC) 09:06 5 comments: