Saturday's DX - And Then Suddenly Nothing Happened

A very nice start actually, as at 1100 UTC most frequencies housing Japan's broadcasters were speaking Japanese, and I also noted some interesting stations from China, such as Nei Menggu RGD on 1584. I was just waiting for New Zealand to become audible, when suddenly someone cut the antenna. Or someone hadn't but it sounded like that. Dead quiet, except my semi-local Russians. When conditions slowy recovered a few hours later it was typically auroral with Iran dominating almost every frequency they're listed on. One's been uploaded and is available in the Audio Files section.

Before the DX started I made a brief trip to Berlevåg to see old aquaintances. On the way back I took the picture below. My QTH is just where the sun focuses its rays. Incidentally, maybe.

We'll see what the night brings. I'm in contact with Mika Mäkeläinen in Aihkiniemi via SMS, comprising the Arctic Early Warning Radio Alarm System. Or something to that effect. 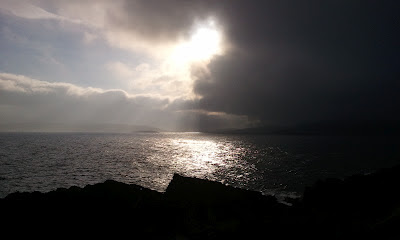 Bjarne;
Always nice to see your news from the Arctic! The arctic geese are now here at my QTH... anyway the conditions seems to go up and down these days. Best 73! Tarmo