A somewhat uneventful night sort of peaked at 06:00 with loggings of rare WBHR Sauk Rapids MN 660, and new (to me) WVAL 800 from the same city. WREY-MN 630 also noted. Good signals from Minnesota and the eastern Dakotas - more suprising was that at the same time several Colombians were audible, and even Radio Monumental, Chacuí Paraguay 1080. And then KKMO-WA on 1360. Propagation which we, with directive beverage antennas, call unfocused.

WVAL-800 is a good example of "seeing the station" with Jaguar software. With CKLW being the huge channel dominant, it is useful to use the Jaguar Spectra tool to see which other stations are visible, but maybe buried in the dominant station's signal. As luck would have it, WVAL came from virtually nothing to a good signal a few minutes around the full hour, and then faded away. 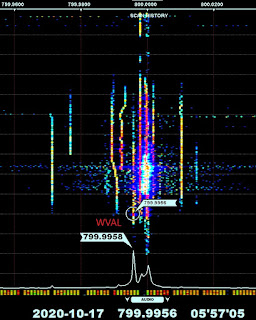 The Spectra tool view also gives a good impression of how many stations are actually on the frequency, but not audible. Since stations tend to have small, and often stable offsets from the nominal frequency, one can make qualified guesses about station identity.

Ole arrived around noon after an arduous journey on snowy and icy roads. DX-peditioning is not for the faint of heart! Later on we did another trip to Mount Loran for battery and SSD replacements, and finishing antenna repairs. Frequent snow showers and slushy roads. 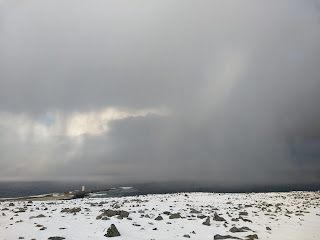 Dinner time! Fried salmon with carbonara. The white wine came all the way from New Zealand, a 2018 Yealand Sauvignon Blanc. For dessert we enjoyed a blueberry pie with custard, and of course Amaretto!

Weather is much the same, snow showers with clear skies in between and temperatures just below freezing.

Bjarne, wow.
Yes currently the conditions seems to be interesting as mw is full of stations and it seems the antenna directon does not matter so much. Definately typical solar minimum conditions. Regarding the remotes and Kiwis Finnish DX Ass is is installing several Kiwis in Finland. Unfortunately not yet in Lapland! All the best to your DX ped! 73,Tarmo