Signal levels towards North America varied quite a lot overnight, with a clear dip around 04:00. It didn't really recover until early afternoon (!) with very strong signals from Alaska and Hawaii around 13:00. The morning signal levels were low towards Asia/Pacific as well, but the dead band allowed signals from the Pacific islands and Hokkaido. In fact, the Chinese power houses, many of them incredibly dirty, didn't begin to dominate until 14:00. The image below shows how Newstalk ZB-1035 is the first signal visible, then at 13:00 it's quite dominant, before the highly un-synchronized CNR1 network starts to fade up - 3-4 hours "behind schedule". 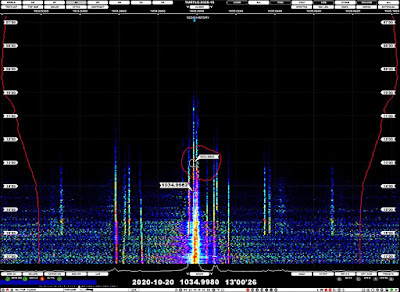 Lots of New Zealand stations were noted, but the noise floor is still on the high side, so few below 1000 kHz. The NHK-2 close-down at 15:40 brought few stations of interest as Hokkaido stations with their generic non-QTH ID dominated too much.

Solar weather is a bit unsettled now, so we're hoping for more surprise openings towards North America and the Pacific.

It's not all live DX-ing though. Playback revealed WCRA Effingham IL 1090 from a while ago.

Time for one of the KONG signature dishes: Reindeer sirloins! For starters we had Bruschetta with Meinklang red wine. The main course was sirloins served with mashed carrots and potatoes, sauce with chanterelle and lingonberry jam. For dessert: Cloudberries in whipped cream. With the meat we tested a 1996 Chateau Musar. We may not go with that one again. With the cloudberries we had another round with Tokayer, and a Grappa at the end to clean up our taste buds.

Weather: The same, the same... occiasional rain showers, 2-4 Celsius, calm. The photo below is pretty much like yesterday's except this morning we had a snow shower coming in. 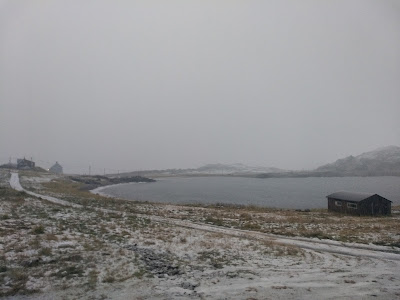