The spectra from Mount Loran tells how much signal levels varied throughout the night and until lunchtime. Often, disturbed condtions can give some very surprising loggings, however, as far as we know, not this time. We did note WMEJ-MS 1190 though, along with WBNS-OH 1460 at 01:00. Otherwise, only the usual stations. 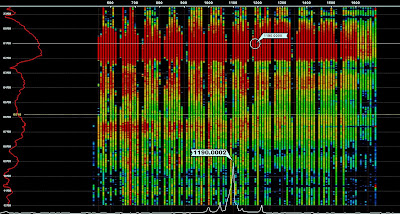 Asia/Pacific DX was not good at all. The Chinese stations were on very early, and nothing of interest was noted. A couple of 1-kW NHK-2 stations were ID'ed at the 15:40 close-down. So most of the day was spent listening to IQ recordings from previous days and weeks.

While doing the daily Mount Loran battery and SSD replacement routine, we took a detour into Berlevåg where the fish shop sold fish cakes right out of the frying pan. We grabbed a few (for each) and headed back to Kongsfjord for a delicious lunch.

We had enough fish cakes when we started making dinner too, so for starters we re-fried them (sliced in halves) in bacon fat, and served with bacon slices and fried fresh ginger, grated carrots with fresh ginger and lime. A Calle's Riesling was the selected wine.

The main course was another leftover, as we had reindeer sirloins from the day before, served cold, with mashed potatoes and carrots, sauce with chanterelle and the rest of the lingonberry jam. The wine was a López de Heredia Rioja from 2007.

For dessert: Selected cheese with slightly roasted sourdough bread. Papillon Roquefort, Chévre, Gruyere and Parmesan were served with a Dow's 2006 Vintage Port. We have lots more cheese. And port...

Weather was a bit cooler than yesterday, hovering around zero and down to around -5 as the afternoon turned into night. Another starry, starry night. And what happened in the night will be told tomorrow. Interesting things...

As usual, a morning picture from today, as you can see the weather is very nice and the temperature is positive again. Friday and Saturday will be very windy and rainy. Today by the way, we're eating out! 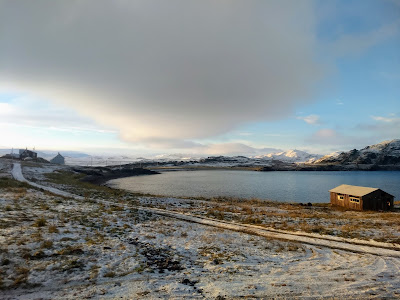