OK, so here we go again! We were doing some math yesterday, and found out that over the past 24 years we've actually spent more than a year together on this location! Starting off with extremely basic equipment, and little comfort, the journey has been spectacular indeed.

Anyway, I picked up OJ Sagdahl at Berlevåg airport on Friday afternoon, and we headed directly towards our Mount Loran remote, battery-powered Perseus/Jaguar/1000-metre beverage setup. After replacing the battery and the SSD, we discovered that "something", most likely a reindeer, had messed around with the antenna. The antenna lead to the transformer had been torn off, so the last four nights of recording were total silence. After half an hour, the damage was repaired, and there was no sign of the reindeer so it probably got away unharmed.

Not too much to report station-wise - KGMI Bellingham WA 790 isn't too common though. Tonga-1017 and Marshall Islands-1098 were heard with moderate levels.

Early in the evening Ole Forr reported that he's on his way from Andøya, a 12-hour drive even in summer conditions. Now: Icy roads.

We were only two for dinner this first day: The usual self-composed Bjarne-style fish gratin. We were supposed to have chocolate pudding with custard for dessert, but there simply wasn't room for any more.

Ole told us this morning he decided to rest a bit in Karasjok before doing the last 280-km leg. We will head out towards Mount Loran later today to pick up the latest catches and do final antenna repairs. And with that, below is the usual morning picture from Kongsfjord. Temperatures just above freezing in the day, at or below at night. 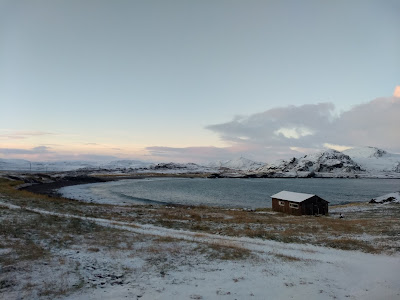