KONG21 Antennas And Receivers - Some Reflections

I had four SDRs with me to this DX-pedition: The Winradio G31DDC and G33DDC, the RF Space NetSDR and the Perseus. The Perseus has been with me for a few years but the G33 and the NetSDR were new this year. Actually, the G31 was never put to use. I've been just as busy testing and discussing software as DX-ing this time, actually a rewarding experience since I've had some fruitful discussions with  Simon at SDR-Radio.com and Ian at Radixon (Winradio).

Most of the time, if not all, the Perseus has been connected to the 50-degrees beverage, the G33 to the 340 and the NetSDR to the 310. We also had the QDFA up, and another receiver (G31) available.  But they were never put into use. The QDFA wasn't working properly, and the reason wasn't discovered until Saturday afternoon when the rest of the crew had left. A rodent had short-circuited the feedline.The cut was so small I didn't discover it the first time I checked the feedlines. And although conditions weren't outstanding, we never found time to investigate deeper. Until Saturday afternoon.

The QDFA feedline is now fixed, and will be available for remote DX for the four of us when conditions improve. Even today the effects were stunning compared to the 340 beverage (the QDFA is 350 but a wider front lobe) as semi-local Murmansk 657 was 27 dB weaker on the QDFA, while KBRW on 680 was a dB stronger. Similar effects on 1035 where China and Estonia were fighting for glory on the 50 degree, but the QDFA nulled Estonia almost into noise level.

Nighttime conditions were poor throughout the week so we probably wouldn't have heard a lot more anyway, but it's a bit embarrasing to know that we could have lost a lot of good DX because we failed to spot the faulty feedline.

The G33 has been a real workhorse. It's been 100 % stable, and by and large is an excellent receiver. The NetSDR was tested with both Spectravue and SDR-Radio software, the latter with beta versions. Most of the time operation has been smooth and trouble-free although I had trouble with scheduled recordings a while until a fix was made. A write-up on the NetSDR will be released soon. 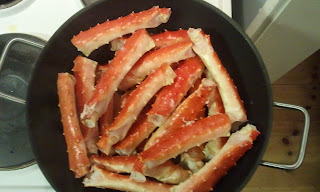 Finally a picture of the signature dish here in KONGsfjord, namely the King Crab, in Norwegian KONGekrabbe.  The raw, frozen crab was supplied by Berle Fisk AS and Svein Olaf, and was immaculate. The best restaurants in Oslo aren't even close in matching this quality.
Lagt inn av Bjarne Mjelde at (UTC) 22:33