Nice propagation to North America - and finally some New Zealand!

The night started early, with stations like WNCO-OH 1340, KOOQ-NE 1410, KBNP-OR 1410, KLGN-IA 1560, KTGE-CA 1570. In the morning, conditions turned towards the west coast with massive signals from KERN-CA 1180 (whacked antenna system? Supposed to run to the SW on  both day and night pattern), KSDO-CA 1130, and several other not commonly heard stations from the area.

Signal levels were very good, but it was difficult to find new stations. We'll see if closer scrutiny of the IQ files may reveal some surprises.

A bit after noon, we drove to Berlevåg for some shopping, a visit to the local café (which turned out to be closed on Mondays!) and to replace the SSD drive on Mount Loran. Mount Loran is not a mountain at all, but a flat area 90 masl where the dismantled Loran C antenna was set up. Perfect for a 1000-metre beverage antenna. The daily trip is described by the pictures below:

By the way, the road going uphill in the background in the last photo is to the Raggovidda wind farm, possibly the most efficient land-based wind farm there is.
Back at the KONG HQ we were greeted with a nice opening to New Zealand! Around 20 stations were positively identified.
And then we greeted OJ with his 4th (!!!!) Delaware QSL, as he received an email from WJWL 900 in Georgetown!
After a couple of beers, like the one below from one of Norway's superb breweries, 7 Fjell in Bergen, it was time for left-overs! 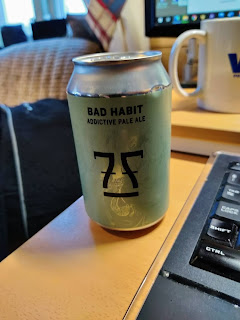 We had quite a bit of lamb shanks left from yesterday, so we made a conversion to meat soup, adding generous amounts of vegetables. Served with OJ's fabulous sourdough bread and real butter. For dessert we had the rest of yesterday's chocolate mousse. With Amaretto of course. And Grappa of course.
Windy again today with some intense snow showers, and the temperature dropped to around 2 Celsius. Our visit to Mount Loran was "between showers". Later in the evening the wind calmed down considerably, and some bare sky became visible. I shot this picture of the moon outside the house. A little aurora too - hopefully no more of that and we can enjoy another night and day with good conditions.
Lagt inn av Bjarne Mjelde at (UTC) 18:09

Hi OJ and OLE
I was surprised to see that you heard our local station WNCO on 1340 khz in Ohio. I know of a station in Ireland who has also heard WNCO using a 1000 meter beverage antenna as you do. Is it possible to hear low power AM broadcast stations located in the USA in your part of the world with smaller antennas. Say 160 meter Inv. L or maybe even a dipole ??

Hi Doyle,
Thanks for commenting our DX-pedition. Yes you can hear stations far away with say an outdoor loop, dipole or inverted L. Whatever available space allows you to. Beverage antennas are however superior - they don't have to be 1000 metres, but "the longer, the better".
/Bjarne/