One interesting observation on the 340 beverage the previous night, confirming a finding I had during very disturbed conditions a few weeks ago: Brazil! Almost perpendicular to the 340 antenna, and their carrier seemed to be smeared out over a 100 Hz or more at around 05:30 UTC. Below are three of them, on roughly 1569.98, 1569.95 and 1520.02 kHz. This was also the case on several other frequencies. 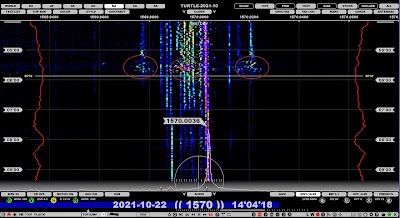 We checked with the 305-degrees Mount Loran recordings where the signals should be closer to the main lobe and possibly stronger. Almost no trace of the Brazilian stations, and what carriers could be spotted, were relatively clean.

So, what has happened? Could it be that the skywave signals from the Brazilian stations were reflected back to the 340 beverage from a point north of us? Similar to FM backscatter? The audio from these stations were somewhat distorted, which may or may not matter. Many stations from Brazil aren't known for their excellent audio quality.

And if so, what happened to the ionosphere at 05:30? Nothing significant, to judge from solar data.

In the evening, a visit from Finland! Jim Solatie and Mika Mäkeläinen have been here before though quite a long time ago, and took the 4-hour drive on winter roads from their DXpedition site in Aihkiniemi for a quick gettogether and some serious dinner!

We started off with Bruschetta based on OJ's sourdough bread, while the fresh King Crab was being baked on a thick base of sea salt in a large pot. The king crab was, as always, served with Carbonara, and a Kim Crawford Sauvignon Blanc. For dessert we had fresh, lightly warmed Cloudberries with Cointreau and Grappa. 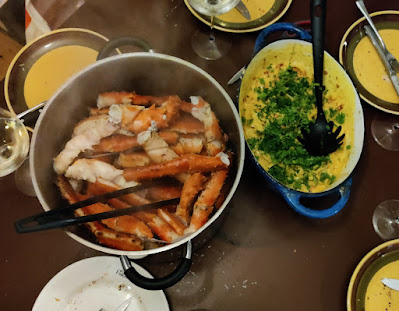 Weather: Occasional snow showers, up to fresh breeze but a bit of sun too. From 2 above to 2 below zero. Today Saturday will be the last full day of KONG43. There will probably be another update on Sunday morning.

Thank you for the fabulous dinner and excellent company! For us at least, Kongsfjord is the King Crab capital of the world :)

With that bizarre off-beam Brazil logging, you may have discovered a new form of propagation! Very interesting. Reminds me of the time that some Midwestern USA DXers discovered that the ionization trail formed by the space shuttle landing at Florida's KSC causes MW signals to skip-but only along that very narrow ionization trail. DXers in Illinois and Indiana were getting armchair copy of Wyoming on 650, 830, etc. and Colorado on 850, 760 etc. with portable radios. In the middle of the day.