The Mini-Whip - Erecting It And Initial Results

Although I have used the Mini-Whip before, this is the first time I've erected it properly, and made a systematic test and comparison with my other antennas.

I decided to mount the Mini-Whip to a 21-ft telescoping fiber glass mast from Max-Gain. The mast costs a lot more than the antenna, but is extremely robust. The elements are hollow, allowing the feed line to run inside the mast. I secured the antenna with Coax-Seal at the top. 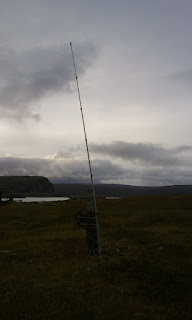 Of course, the fiber glass mast needs a support, so I basically used what was at hand.

Identical masts have been in use for two winters in the QDFA array, and I don't expect it to collapse or break.

At the bottom of the mast I made extra room for the feedline to avoid stress and potential damage.

On to the tests! Comparing a small, unidirectional active antenna with directive beverages from 225 to 500 meters long is a bit like comparing a family sedan with a racing car - and half expecting the former to win. And just so it's said: On Shortwave the Mini-Whip outperformed all my other antennas with a comfortable margin. But what about Mediumwave? 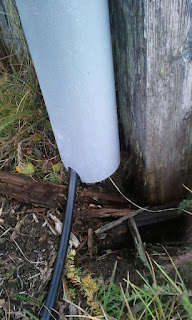 And this is how it turned out:

10-20 dB behind the 310 isn't bad at all, and almost equal levels with the QDFA at times. I did expect it to fare better on LW though, given its reputation as an excellent antenna for NDB hunting.

One important factor I have missed in this test however is that the other antennas have preamps in front, while the Mini-Whip has none (except the one in the Power Feed Unit).

Because of this, I did a quick measurement of each antenna's noise floor at current conditions. The Mini-Whip measured -112 dBm (1200 kHz, daylight), while the beverages were around -118 dBm. All measurements were done with the G33DDC Excalibur Pro.

Skywave tests have been postponed to a later weekend.

How long is your whip (the E-field probe)? Is it an original PA0RDT with 3 cm probe or a longer whip?
Have you grounded the coaxial cable at the bottom of the mast?
According to my experience 3 cm are to short for LW and VLF reception (I use 1,3 m). And a good ground is essential as a counterpart to the whip, while the coaxial cable introduces lots of resonances on shortwave bands which sometimes almost null out some SW frequencies, sometimes amplify SW signals.
(Don't ask me about experiences in DX reception on VLF. I only could tell you a lot about noise from routers, plasma TVs, switching power supplies and solar transformers in the neighbourhood. But for LW ...SW the Whip is an excellent antenna.)
Henry

It is the original PA0RDT. I suppose on lower frequencies height above grounds matters more than the length of the whip - if not there should be an enormous difference between 3 cm and 1300 cm. A comparison with the Clifton Labs Z1501 3 meter whip vs. 1.5 meter whip showed no difference on MW and LW although on SW the difference was very noticeable.

The feed line is waiting to be grounded.

I'll be very interested to learn if your Mini-Whip improves with grounding. I've always considered the #1 drawback of my (original PA0RDT) Mini-Whip to be its suceptibility to noise. However, I've never taken the time to ground the coax shield as I've always used the antenna during DXpeditions as an alternative, omnidirectional antenna to Beverages, phased loops, etc.

A few years ago the Mini-Whip did alert me to a TA opening at Grayland. I would have completely missed the TAs if it hadn't been for the Mini-Whip.

So how did grounding the coax shield work?

I am very impressed with the PA0RDT used by the web SDR at http://websdr.ewi.utwente.nl:8901/

Amazing really. I want to build one soon. :-)

Sorry that I never followed up the shield grounding issue - actually I thought I had.

However, I did ground the coax braid. There was no significant difference, although I did not do an A-B test that could detect subtle differences. My (and Roelof's) conclusion is that the Mini-Whip is placed far enough away from any electrical field RF sources.

A very interesting and useful website! Thanks.
I have found that active antennas will pick up signals traveling up their coax shield and if that shield is also connected back in the shack to other antennas, i.e. where they enter an antenna switch or the chassis of equipment, the amplifier of the active antenna will amplify those and send them to the receiver as if they were being picked up by the active antenna probe!
Reading PA0RDT's notes.... I found that one needs to disconnect all other antennas to hear what the AA is truly receiving all by itself, then to fit ferrites onto its coax to stop signals entering via its shield, also to earth the shield as close as possible to the base of the mast.
When one has done all the above one is in a position to properly assess the AA's capabilities.My miniwhip and 'scanmaster' AAs responded well to these actions.73 2E0CIT