StationList - A Killer App For the Perseus

The Perseus SDR was the first "serious" European SDR manufacturer, and soon drew attention to people who wanted to develop their own applications to expand the Perseus software. For the serious MW and NDB DX-er, maybe the best of them all is Jürgen Bartels' Station List, now in version 2.1.1.1.

Why is it so?
Imagine you being on a DX-pedition (or your own home for that matter), and in the course of five days of intensive DX-ing and recording you are stuck with some 2 TB of data. Maybe you have recorded all the TOH and BOH over most of the five days, and some interesting DX in between. Well it was fun doing the DX session, but when on earth will you have time to get through the thousands of potential stations? Let's say there are 100 interesting frequencies, you conservatively record two minutes on the top, two minutes at around five past, and two-three minutes at the bottom of the hour. That's 700 minutes of listening, for checking one single hour!
Admit it, you're never going to get through all this.

Often, when we check RF recordings, we select one recording, and start listening at the top end, or the bottom end. Now....there was an interesting station on 1290, I must remember that one when I start the next recording. But I don't, do I, because I found an interesting station on 1150 instead and forgot all about that interesting station on 1290. Now, wouldn't it be better if you could stay on 1290 for as long as it took to find out what it was - just change into the next file with one mouse click while keeping the same frequency and at the exact same spot in the playback? To track 1290 throughout the night? Of course it would. And that's what Station List does.

Among many other things.

Actually, the function mentioned above may not even be the main purpose of Station List. Describing Station List is a bit difficult, because aside for monitoring recordings, it is a lot of things. It is a database which interacts with Perseus; you can use a database to tune the Perseus, or if you tune the Perseus, the database of choice follows it. And you can import databases, such as KOJE, FMLIST, MWLIST, LA MW-LIST, EIBI, TBL and Nagoya. It is a tool for scheduled RF recordings. It is a log program. It is a tuning program. It is a server program. It is a server monitoring program. It is indeed a lot of things. Actually it is so much, it's impossible for me to write a comprehensive review or description. But it makes checking your 2 TB of RF recordings a lot quicker and a lot more fun than the traditional way. The pictures below may hopefully serve as an illustration.

I will test the Scheduler later on. 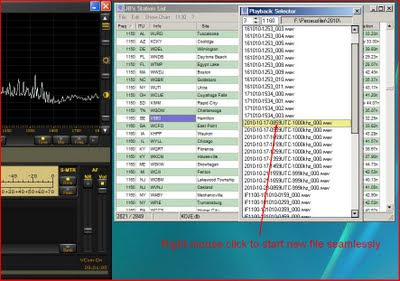 Hello Bjarne,
You are absolutely "spot on" with your comments.
Another important factor - the recording scheduler is very stable. Since I started to use this software no missed recordings!
Nice to see you are back updating the blog.
73
Thomas Nilsson

Just echoing previous comments: an excellent addition. Coupled to a remote antenna switch, it takes care of preprogrammed recording, switching to selected antennas and names the files acc. to the antenna!