(Updated DEC-5 re. loss of connection after PC reboot)

Late summer I became aware of the RX666, a Chinese build of Oscar Steila’s BBRF103 design. Basically, a design with a 16-bit ADC capable of sampling 32 MHz, and with a R820T2 chip “thrown in” to allow reception up to 1800 MHz. I did a write-up which you can read here. The antenna connectors were not up to standard, so after a while I returned it for a refund.

The RX888 is very much the same design, but with a smaller PCB and apparently better build quality. Unlike the RX666, the RX888 has an LNA built-in for better sensitivity.

As a MW DX-er I’m mostly interested in how it performs on MW. And for that, three things matter more: Sensitivity, large dynamic range, and a minimum of 1200 kHz alias-free sampling. And of course, software to match.

The RX888 footprint is quite a bit smaller than the RX666. It measures 72 x 83 x 43 mm (excluding antenna connectors) and weighs in at 160 grams – less than half that of the RX666. Heat dissipation panels make up three sides and of course adds to the physical size. 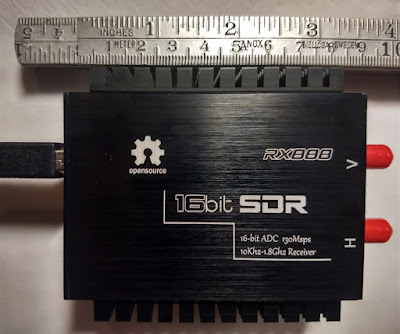 A 16-bit ADC (Analog Devices LTC2208 in this case) is always better than 14-bit or 12-bit ADCs, especially when negotiating the huge signal levels on the MW band. In that respect, the RX888 performs very well indeed, even if the only filter is a 64 MHz low pass filter. The downside, as with the RX666 is sensitivity. Although the RX888 has an LNA built-in, sensitivity figures are still in the lower part of the list, 3-4 dB better than the RX666. I measured -95, -98 and -99 dBm on 500, 1000 and 1500 kHz (AM mode, 6 kHz bandwidth, a 400 Hz signal with 30 % modulation). This is 5-6 dB worse than the Perseus, and 10-12 dB worse than the Airspy HF+. The good part though, is that the ADC is quite forgiving if you decide to use external amplification. A 16-dB preamp from DX-Engineering increased sensitivity by 13-14 dB, which is a massive improvement. I did test this setup on a very high signal level MW band, fed from a beverage antenna, and noted no overloading. If you do, you can always reduce RF gain by 10 or 20 dB. 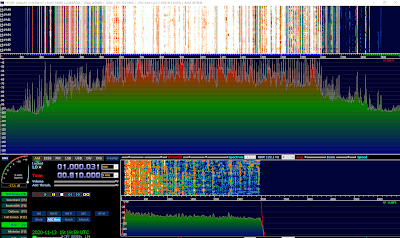 Available sample rates when using the dlls developed for HDSDR are 2, 4, 8, 16 and 32 MHz. In addition, there is support for 64 MHz sampling rate. SDR Console also supports the RX666 and RX888 and offers a 1-MHz sampling rate in addition.

It does require a USB 3.0 port on the PC, and of course the wider sampling rates, the more it demands from your PC. Since the Cypress driver was already installed for the RX666, the RX888 connected right away.

Alas, to my disappointment both the RX666 and RX888 suffer from a serious flaw: After a PC reboot, the devices will not restart. You need to disconnect and reconnect the USB cable for the PC to recognize the devices. This may not matter too much if you always sit in front of the PC. If you want to control the PC via remote control, my only advice is: Don't restart the PC.

So, while the Perseus + Jaguar combo is still my choice for MW DX-ing, the RX888 appears to perform very well if some external gain is added.

Ebay prices are in the USD 230-250 range, not much more than the SDRPlay RSPdx but a lot more resilient to large signal levels and only slightly less sensitive. And not very much more than the Airspy HF+/Discovery, but able to sample the entire MW band.

I'm happy to see the further development of SDR receivers. Now, if only a Perseus v 2 would be developed!

Very interesting.l guess you would have to factor the cost of the DX engineering Pre Amp, not sure how much or which model you are using? l wonder if we will see 24bit SDR units in the future.One of my bug bears has always been software, so l am really pleased to see HDSDR being used to drive the SDR unit,there may be more complex software packages, but HDSDR is pretty simple and effective to use.

Something l forgot to ask, does it still have the same power up issues as the RX666

Ah now that's a question I never though about checking out! Will find out next time I'm on site.

Thanks Bjarne, also what model DX engineering pre amp do you use?

Damien, checked today. Yes, not "visible" after a PC reboot. The blogpost is updated.

Thanks Bjarne, good to know it has the same issues, Still amazing value for money.

Bjarne,did you test in the past the Elad s2 and what is you opinion thx take save 73,

The latest extio for RX888 is here https://github.com/ik1xpv/ExtIO_sddc/releases

Looks live the MK2 version has been released, l wonder if it's improved?

Was wondering about a work around for the lUSB issue.
You could try unable and disable USB device,n device manager, that may be a work around.