SDRs - Does the Enclosure Matter?

Traditional receivers, and most SDRs, have been encased in aluminium. Conventional wisdom says this is because they need to be protected from RFI. In later years though, some of the SDRPlay SDRs have had plastic enclosures, and the new Airspy HF+ Discovery is also said to be encased in plastic. It's been said that the RSP1A enclosure has an inner metal paint. That could be, but it looks like plastic, and it feels like plastic.

Anyway - aluminium enclosures are offered as a third-party solution to those who prefer metal, and I ordered one. When it arrived, I naturally had to remove the plastic enclosure, so I thought why not test the device with real signals, and without signals, in its original enclosure, the new metal enclosure, and bare? Just to find out how efficient they would be.

So I ran tests on FM and SW with 8 MHz bandwidths and compared spectra and waterfalls in SDR Console.

The results were...interesting. As a matter of fact, there was no difference whatsoever, even when the RSP1A board lay bare on the floor.

So, is conventional wisdom wrong? Not necessarily, my test is circumstantial evidence only. That said, my radio room has four PCs running, 5-6 SDRs and even a couple of rather dirty switching PSUs. So, lots of potential RFI. But the RSP1A was as immune bare as it was enclosed.

I'll keep the metal enclosure though, it's a bit smaller than the original plastic one, and looks much better. And there are other hazards to electrical equipment than RFI. Especially when they're on the floor! 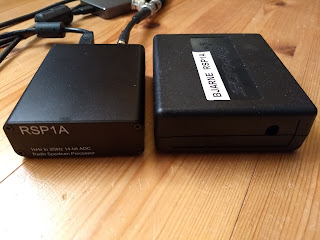