Finally, ionospheric condtions normalised, however conditions overnight were downright depressing. Only brief appearences from stations like KRWB-MN 1410 and KOVC-ND 1490. Later on, KTWG Agatna Guam surfaced on 801, and we even heard the ABC Majestic Fanfare on 1602, so hopefully, things are improving.

There is still lots of interesting stuff to be found on previous days though.

We collected 10 kg of King Crab at the Norway Seafoods plant in Berlevåg for Thursday, and prepared a very late reindeer dinner as our special guest of honour, Torgeir Nyen, arrived close to midnight.

The story about the Mount Loran beverage has been told before, but here's a picture taken today when we replaced the hard drive. It's rather stealthy in an area where few if any trek. Inside, there is a 12V battery, an Intel NUC PC, a 500 GB SSD drive, a Perseus SDR and a mobile 4G modem.

Weather: Much of the same; calm, 5-6 Celsius and some rain. 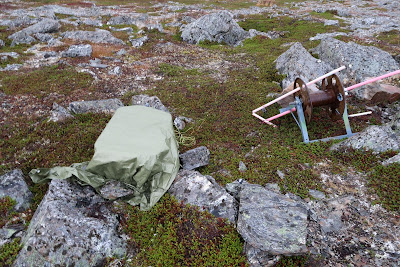