Note to self: Maybe I should post more often...

As many of you know, KSEN ran a two-night DX test on November 7 and 8. I have heard (and QSL-ed) KSEN on several occasions before, but I try to never miss a DX test.

November 7: Despite reasonably good conditions, in the beginning I heard nothing at all. Several other stations came and went on 1150, CKOC, WHBY, KKNW and CJSL were noted. Several North American DX-ers reported nothing heard, so I wondered if it was on at all. Then, at 07:35 I could hear occasional sweep tones, and finally just before 08:00 a morse code ID. No voice audio was detected. Why so weak? Well, it turned out that they had technical issues resulting in an output of only around 800 watts! So, they didn't reach out very well at all that day.

The reception was made with a Perseus SDR connected to a 340-metre dual (staggered) beverage antenna. The distance was 6402 km, not bad for 800 watts.

On November 8 everything was working fine, and reception was good at my spot. Today I received the DX test QSL. Thanks to Paul Walker, Les Rayburn and Joe Miller for their time and trouble. 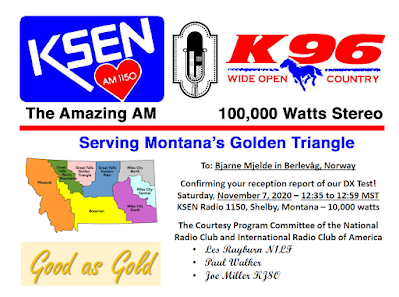